You are here: Home>Locations>Haseley>Growing up in a Warwickshire Filling Station: Expansion

Growing up in a Warwickshire Filling Station: Expansion 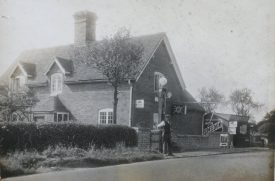 The filling station in the 1920s, when owned by FG Davies, who is believed to be in the photograph.
Image courtesy of RT Bolton. Warwickshire County Record Office reference B.HAS.Bol(P) 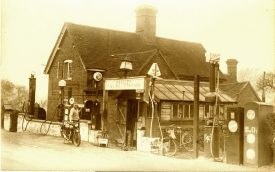 The filling station in the early 1930s, reproduced from a postcard. Leonard Bolton by motorcycle, which most probably belonged to the photographer.
Image courtesy of RT Bolton. Warwickshire County Record Office reference B.HAS.Bol(P) 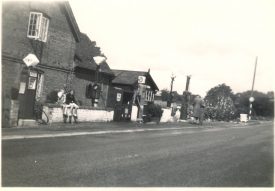 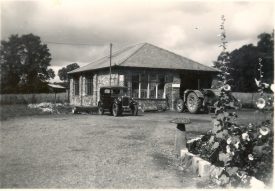 Leonard [my father] purchased from G Davies a house, with a small filling station attached, on the Birmingham Road at Haseley, about a mile south from The Gas House and probably about the same distance from Moat Farm. With his wife and family he took over this filling station in 1929, it consisted of a largish detached house, placed endwise to the road with the garden running from the front of the house, a wooden building, which was the shop and a number of petrol pumps – hand operated of course – of various makes. Motoring at the time was largely a leisure activity and no doubt to boost income a small tea-room was opened in a brick building attached to the end of the house.

Development of the filling station and garage

At various times over the years my father bought additional parcels of land on [the] north side, firstly additional petrol pumps together with their storage tanks were added to the side of the wooden shop […] [Early on,] the filling station looks very ramshackle but this was typical of the period, towards the end of the 1920s the Council for the Protection of Rural England campaigned against unsightly garages and filling stations and in 1927 and 1928 legislation governing the appearance of these premises was introduced. Amongst the bylaws local councils could even dictate what colour of paint was used, the pumps and other items at Haseley were painted a dark green (Brunswick Green I think it was called), no doubt a consequence of these bylaws.

In 1934 a larger piece of ground fronting the road was bought, on which a brick building was erected – the bricks mainly being salvaged from the demolition of Warwick prison. […] The erection of this workshop allowed car repairs to be undertaken and over the years a number of people assisted with this work as I understand it.

During the 1930s my father employed my cousin Betty […] and may also have employed her earlier than this. Betty helped with serving petrol and in the shop, which allowed my father to deal with administration and ordering as well as serving – filling with hand-operated pumps was a long process. […] When Betty left (I don’t know the reason why) my father worked on his own with assistance from my mother and me. The front part, i.e. in front of the counter, of this little wooden shop also served as a working area for my father to repair bicycles, of which there were many being used in the locality.

At some time in 1950s (after 1955) the wooden shop had to be moved as a result of alterations to the road. Main roads – of which the A41 was one – were widened to a standard 22 feet and this together with some realignment of the bend in the road and raising its elevation, resulted in the shop having to be raised and moved backwards a few feet.

In 1956 the owner of the field between the garage and the café decided to sell and sought interest from both the café owner […] and my father, the outcome being that they both bought half the field each, the café owner (George Shaw) to increase the size of the car park and my father to expand the garage. Onto this additional land the filling station was relocated to bring it up to post war standards (it had been very much in a time warp, essentially the same shed, the pull in being the roadside verge tarmacadamed over and the pumps in the same position as original but now electric powered instead of hand operated). A new shop (or kiosk as it was termed at the time) was built on the same lines as the workshop and the electric pumps relocated, additional matching second hand ones were purchased to make five in total, arranged on a central island so that cars could be filled from either of the two sides. […] New storage tanks were required as the old original tanks were only of 500 gallons capacity and petrol companies were increasingly reluctant to supply this amount, preferring or indeed insisting upon a minimum ‘drop’ of 1000 gallons.

This article is an abridged section from the memoir Four Gallons of Petrol and a Pint of Oil. The full version can be seen at Warwickshire County Record Office, reference B.HAS.Bol(P)