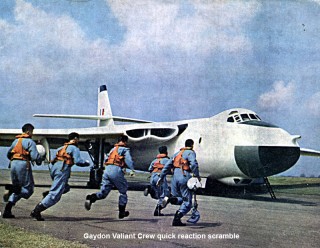 The former RAF bomber station at Gaydon on the Banbury Road played a pivotal role in Britain’s defence capabilities during the years of the so-called Cold War in the 1950s and 60s. In April 1959 the Freedom of Royal Leamington Spa was conferred on the station ‘In appreciation of the glorious achievements of the Royal Air Force and as an expression of the esteem in which that force is held by the inhabitants’. 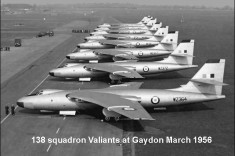 During the 1950s, the British Government invested heavily in a programme to encourage aircraft manufacturers to design and develop a high-level strategic bomber capable of delivering the British nuclear bomb. These so-called V bombers, the Victor, Valiant and Vulcan were fundamentally different from anything that had gone before and in January 1955, No 138 Squadron was formed at Gaydon as the first V bomber squadron, part of No 3 Group Bomber Command. Thus began a new chapter in the Gaydon story. 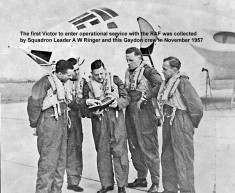 Pilot training on the Valiant and Victor bombers was carried on around the clock, and the noise of these large four-engined jets carried for miles across the flat Warwickshire plain. It was suggested that the ear-splitting noise of the jet engines was endangering the health of people in the villages around Pillerton Hersey at the end of the Gaydon runway. An elderly lady wrote to the Gaydon CO to complain that aircraft vibrations had caused her clock to ‘jump off’ the wall and smash. Ever conscious of maintaining good public relations and in the best traditions of the RAF, the station commander arranged for Gaydon’s skilled instruments mechanics to collect and repair the clock. Station carpenters soon repaired the damaged case and the lady was overjoyed when her rejuvenated clock was returned.

In spite of the high level of security surrounding such a sensitive military installation, people living in that part of south Warwickshire soon became only too aware of the fact that just off the base and close to the Fosse Way, on their doorstep, were several huge bunkers filled with nuclear bombs! What no one knew until much later however was that in the event of war, Gaydon was to be one of the designated dispersal airfields where fully armed V bombers would be stationed 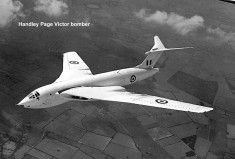 during periods of tension. This of course meant that bases such as Gaydon became primary targets for pre-emptive attack by an enemy. The Cuban missile crisis of 1962 brought the world to the brink of war, and the activities of installations like RAF Gaydon came into sharp focus. The Gaydon aircraft formed part of the Quick Reaction Alert (QRA) force and were fully manned and bombed up ready for immediate take off. 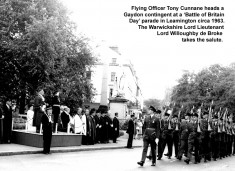 In October 1962 one of Gaydon’s seven Victors, XA934, suffered a serious mechanical failure on take off and crashed in woods at Combrook with the loss of four of the five crew and the complete destruction of the aircraft. The seriously injured co-pilot Flt. Lt. Edward Grinnell was found in a field still strapped into his ejector seat, having ejected at too low an altitude for the proper deployment of his parachute.

The 2,500 Gaydon personnel were held in high regard, and developed excellent relations with local towns and villages in the area. The station was one of only two military units to be honoured with the Freedom of Royal Leamington Spa. Each year the incumbent Mayor of Leamington was dined in the Gaydon Officers’ Mess and given a flight in one of the station’s aircraft along with the CO. Each summer the station hosted a superb Open Day which featured static displays of aircraft and a flying display second only to Farnborough. Up to 100,000 people attended each year with the consequent traffic gridlock. One of the items on the programme was a demonstration ‘scramble’ by the station’s Victors (photograph at the top of this page), four of which would be airborne in a minute-and-a-half.

In the next article, I look at the base after the V bombers depart.

I have previously discussed Gaydon’s time as a wartime base, and this can be found here.