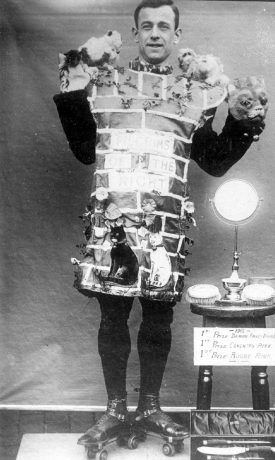 Winner of fancy dress competition with a style all of his own.
Warwickshire County Record Office reference PH 352/215/18 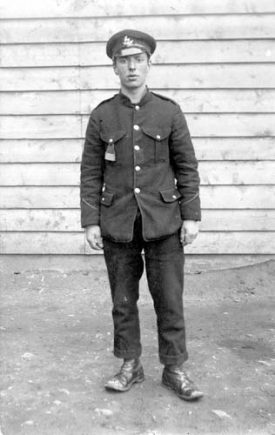 I’ve recently been perusing the Warwickshire County Record Office postcard collection on the lookout for some interesting images depicting Warwickshire’s past. This particular collection comprises approximately 7,910 postcards of Warwickshire and many are more than 100 years old. The images I discovered ranged from the poignant (postcard of a soldier whilst a prisoner of war in Minden, Germany during the First World War), to the ridiculous (a postcard of a man in an unusual fancy dress outfit).

I found myself soon being distracted by what had been written on the back of the postcards. Most were simple messages conveying best wishes to loved ones or commenting on the state of the weather whilst on holiday, much as you would expect to find written on today’s postcards. However, occasionally the messages revealed much more;

One wonders just what trouble Edgar had got himself into whilst in Warwickshire in 1916. Another card sent during the Second World War (1941) reflects the feeling in Warwickshire at the time;

Another postcard gives a glimpse of a transatlantic crossing in 1936 on board the Aquitania, a four funnelled ocean liner. The liner was built to rival the Titanic and Britannic and served in both world wars.

These short insights into the lives of people visiting or residing in Warwickshire may raise more questions than they answer, but they are nevertheless fascinating as snippets of social history. I have come to the conclusion that often what’s on the back of a postcard is just as important as the picture on the front.