You are here: Home>Locations>Atherstone>Atherstone Ball Game 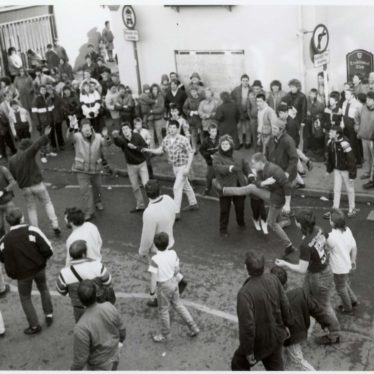 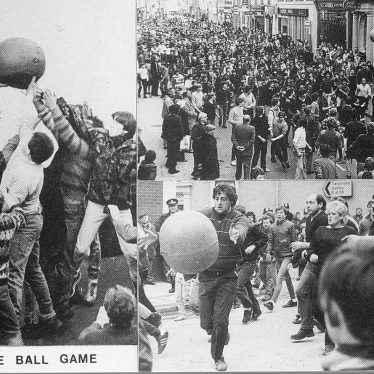 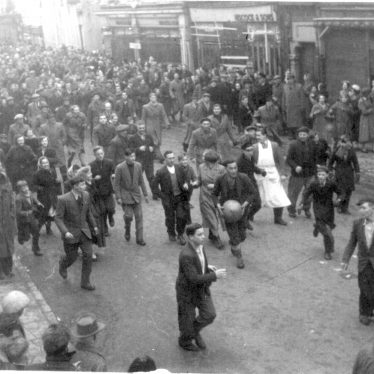 The Atherstone Ball game is an event which has taken place every Shrove Tuesday since the 12th century through the main streets of Atherstone, with the 815th edition taking place in 2014. The ‘ball’ is specially made for the occasion and is thrown into the streets by a sporting or show business personality after gold coins have been thrown out to children waiting below. The likes of Tommy Lawton, Ken Dodd and Larry Grayson have had the pleasure of starting the game, and the winner is the person in possession of the ball when the klaxon sounds at 5pm.

In the past, the game has been a contest between young men from Warwickshire and Leicestershire, but is nowadays a game of two hours, and is kept to Long Street. Even the Second World War and foot and mouth disease have not stopped the game taking place!

In this clip, Sharon Hinds recounts her impressions of the game.

Shrove Tuesday, the Ball Game.  They have a massive big ball, it’s about, it’s got to be about two foot wide.  I actually saw one the other day, one of the old ones.  It’s got to be about two foot in diameter and it’s all through the main part of town, Atherstone.  All the shops get boarded up that morning so that the windows and stuff don’t get broken and the town is absolutely full of people of all ages and they just play.

You got marshals and they throw the ball out from one of the windows, you usually get someone important to throw the ball out and they just play ball.  It’s a bit like a big rugby match I suppose.  They are scrambling about to get this ball and kicking it all over the place and catching it and throwing it and then they let the kids come in and have a go.  Let them have a kick about and then towards the end, it’s a big scramble as to who gets the ball at the end because whoever wins it, that’s their trophy and then they will go all round the different pubs and have a drink and collect money and I think the money tends to go towards, like, local charities that they collect.

The kudos of winning it is what they want, really.

Map marker in the right place? If not, please correct the map.
Locations
Atherstone (306)
Subjects
Other Sports (11)
Author
Sharon Hinds

Linkedin
More from Atherstone
More from Other Sports