You are here: Home>Locations>Ettington>“No Greater Pain Than an Impatient Expectation”

“No Greater Pain Than an Impatient Expectation” 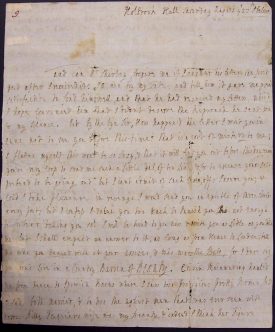 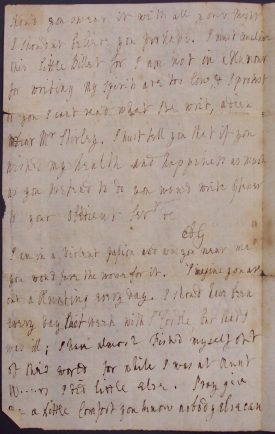 George Shirley was born in 1705 at Staunton Harold, Leicestershire. At the age of 16, he joined the army as an ensign in the First Regiment of Footguards. After his elder brother Robert’s death in 1738, George moved to Ettington, Warwickshire to take up the family seat. He became Lord of the Manor of Ettington.

He was described by a descendant as “much distinguished for his personal appearance, his activity, and his pedestrian feats”.

The writer of this month’s document signed all but one of her letters as ‘A:G’ or ‘A. G-m’. It is only from one letter which is signed ‘A. Graham’ that we have a clue to her identity.

Born in c. 1722, Ann Graham of Suffolk was the youngest of five daughters. Her mother and father died in 1736 and 1737 respectively.

Ann’s mother and aunts were the heiresses of Holbrook Hall, Suffolk, where she writes some of her letters from. This, along with the names, dates and places mentioned in the letters are strong evidence that she is the writer.

Perhaps owing to their 17 year age gap, the relationship appears to have been a secret one. Throughout her letters, Miss Graham takes measures to conceal it. She uses code names for Mr Shirley and asks him to burn her letters.

Unfortunately, we do not have his replies and can only see that Miss Graham was often unsatisfied with his letters.

I wish you would send me a little of your hair be it ever so grey it will be valuable to me, but as I desire it I know you won’t let me have it1

Despite this, she appeared to be realistic about their relationship.

I never expected conjugal affection from you […] I know you are happier now than you would be were we more nearly allied, and that consideration will make me so. [..] I have often been told that an affection easily obtained is never valued, and that men only aim at inspiring with a passion they never intend to feel themselves and if they succeed they despise us for it2.

Love letters were an important part of 18th century courtship, and they sometimes included tokens such as pieces of hair, as Miss Graham asks for.

The letters displayed here are two of seven that have survived.

In the first (CR2131/16/53), she chides Mr Shirley for the shortness of his letters, but is still light hearted, asking:

[…] tell me who you danced with at your [assizes], & who was the Belle, for I dare say you don’t live in a County Barren of Beauty […] I saw two prodigious pretty women, but o! sad, both married and to […] the ugliest men that was ever seen […]

At the end of her letter, she even jokes3:

I hope it wont shock you to hear I am married to a Mr Hale.

In contrast, the second letter (CR2131/16/56) is much more serious, apparently unhappy at Mr Shirley’s lack of response and that he hadn’t attended Bury Fair.

I writ you an age ago, is wither at London still, or else miscarried, for that would please me better than to hear your silence […] I suppose you will say you never had mine or you wou’d certainly have been at Bury Fair, should you say so, nay, should you swear it with all your [might] I shouldn’t believe you perhaps […] I am in a violent passion and was you near me you wou’d fair the worse for it.

3Under the assumption that this is Ann Graham, she was not married to a Mr Hale.