You are here: Home>Locations>Wolston>Floods in Wolston

Wolston has flooded regularly over the years. These residents recall their memories of them. 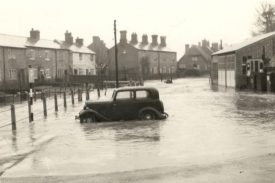 We had terrible floods in Brook Street. It seemed then that the winters were always harder and the summers were always brighter, and the brook used to always freeze over, and this was the early part of the war. And the local vicar, he was a bit eccentric and we got him to test the ice on the brook, and he went straight through! I can’t remember his reaction, but I assume he wasn’t happy. We’d use the brook as a slide when it was frozen enough.

The main reason it doesn’t flood as much nowadays is that when Dr Yardley had the sandpit up here, he drained from up here right through to the river, he drained that. And it never flooded so much after that, but it always flooded back then. 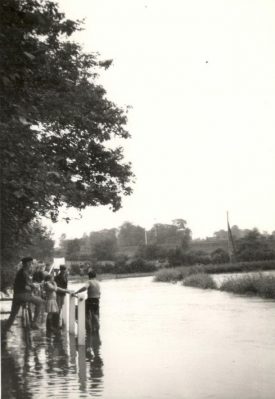 1968-1969, the Avon flooded. the canal had burst its bank in Rugby and flooded into the Avon. It got nearly into our house, our house was at the bottom of the slope. By the time it had peaked and I’d got all the carpets and everything up, it thankfully had peaked. We lifted all the manhole covers up to make it recede a bit more. It had come in a pincer movement from Bluemels, and Sally’s Hole. 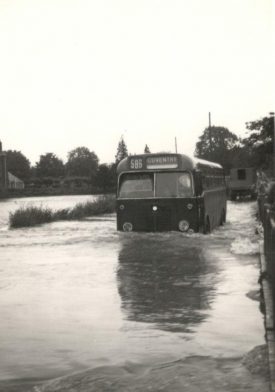 I’ve got some photos from flooding in Wolston, I think it might have been the 70s; we used to get floods all the time.  As young children we remember watching the floods and the vehicles trying to get through; it still happens today. My dad, Sam Owen, was the village milkman for many years.  It became a family business because my brothers then went into it and managed to deliver milk in all weathers even the snow, no matter how deep!  Most people got their milk from the milkman in those days.  Sam had a very jovial personality and I’m sure many people have got many a story they could tell about his jokes and his humour. 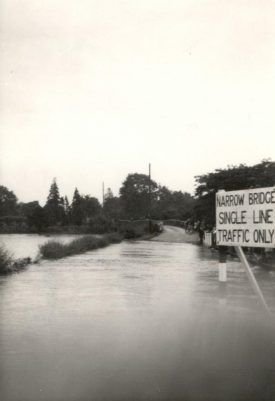