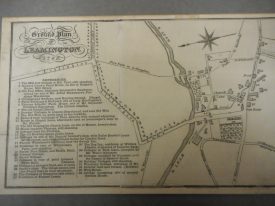 A plan of Leamington Priors in 1783 showing only farm buildings between the parish church (No.7) and the river.
Warwickshire County Record Office, reference CR3961/Temp Box 14/Leamington 3 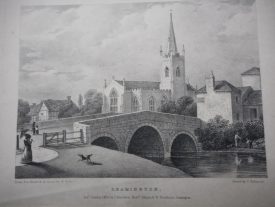 An engraving published in 1826 of All Saints from northwest of the river bridge .
Warwickshire County Record Office, reference PV Lea All 6 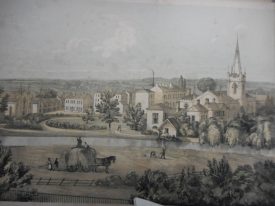 The Priory and its grounds on the southern bank of the river around 1840.
Warwickshire County Record Office, reference PV Lea Gen 5

Like most towns and villages, the names of Leamington’s streets can give clues to buildings and uses that have long since faded from the memory. Mill Street did once lead to a mill on the river until it was demolished in the final year of the 19th century. There were baths in Bath Street but these were emptied for the last time around 150 years ago. And until the introduction of North Sea Gas in the 1970s, Gas Street did indeed lead to the town’s gas works.

So does that mean that there was once a Priory in Priory Terrace? And if it does, does it also mean that there was another one only around half a mile away in Priory Street? As this seems unlikely I would suggest the name actually comes from the historic name of the town, Leamington Priors. While this name does refer to a Priory it is Saint Mary’s Priory (later Abbey) at Kenilworth, rather than one in Leamington.

Leamington had been ‘given’ to Kenilworth Priory around 1150, which meant all the rents from the then village’s farms etc. were paid to the Priory. Although this link was ended when all religious houses were dissolved by Henry VIII in the 1530s the name of the town remained as Leamington Priors. While it fell out of use during the 19th century (especially after the Royal Charter of 1838 giving the town the name of Royal Leamington Spa) it is still the official name used for the ecclesiastical parishes south of the river.

That said, until 1975 there was a building in Priory Terrace that had for many years been known as “the Priory”. However, I can find no evidence that it was ever the home to a religious community, or that a Priory ever existed on the site.

Plans of how the then village of Leamington Priors was laid out in 1783 and 1818 show nothing between the parish church and the river except farm buildings recorded as either belonging to, or occupied by, Thomas Abbotts. An engraving published in 1826 of All Saints from northwest of the river bridge appears to show the farm buildings still standing, whereas a map of 1828 shows only one building on the site, the outline of which matches that of the priory found on later maps.

Although the surviving Parish Rate Books for Leamington date from 1825 there are, unfortunately, no books for 1826, 1827, or 1828 – and the books for 1829 and 1830 do not record Priory Terrace, Leam Terrace, or Victoria Terrace. I did search the lists for Bath Street and Church Street to see if the Priory was recorded there, but there are no properties large enough to have been it. The book for 1831 does list Priory Terrace, when only one property is recorded, so this must be the Priory, it is owned by the Rev. Robert Downes, who had been the curate, then vicar, of All Saints from 1821.

The book “A Complete History of Royal Leamington Spa” by T. B. Dudley (published in 1896) says the farm occupied by Thomas Abbott was purchased by Rev. Downes from Rev Wise when he succeeded him as Vicar of All Saints. The Rev. Downes demolished the farm buildings to build the Priory.

All this seems to suggest the Priory was built in 1827, by the then vicar of All Saints Robert Downes who used it as his vicarage, with its extensive gardens running the full length of the river bank between what is now Victoria Terrace and Mill Street.

I go on to discuss the history of the Priory in more detail, in part two.