You are here: Home>Locations>Rugby>Unlocking the Willans Works Engineering Records Via Cataloguing and Volunteers

Unlocking the Willans Works Engineering Records Via Cataloguing and Volunteers 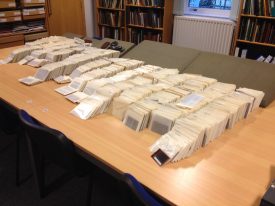 Negatives being re-boxed after arrival from Alstom
Photo by Gary Collins. 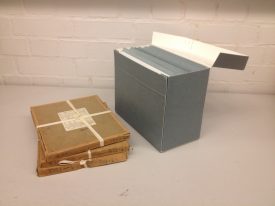 Glass plate negatives in original packaging and after being re-boxed.
Photo by Gary Collins. 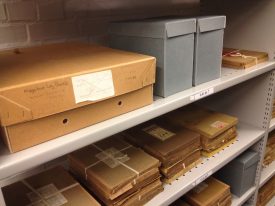 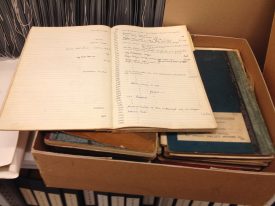 Cataloguing the Willans Works archive material at Warwickshire County Record Office is revealing some interesting facts, partly because of the efforts of volunteers who are helping with the collection. Their work on the records of the Rugby-based engineering firm is helping to show the importance of the company and its pioneering role in the manufacture of steam engines and turbines for electricity generation.

The collection covers the period from the 1870s to the early 2000s and takes in subsequent takeovers by English Electric, GEC and Alstom. One of the main features is the series of negatives from the company’s photographic department. Volunteers have already made great progress in identifying these by using the log books for jobs carried out by the department. The images range from engines, turbines, parts and tools to office and works departments and from products working on site in power stations to company social events such as dinner dances, children’s Christmas parties and sports and gala days. Other volunteers are helping to re-box the negatives, especially the glass plate ones.

Volunteers have also started work on some of the apprentice records that begin in 1893. The initial focus is on the material covering the First World War period and some preliminary research has led to information from the Commonwealth War Graves Commission on one of the apprentices that left to join the armed forces and was subsequently killed.

A register of workmen covering the period 1898-1902 is another record being studied by a volunteer and it shows the previous employers and trades of men joining the company. It indicates how men were being transferred from the Thames Ditton site as machinery was moved from there to Rugby. This information will be extremely useful for researchers looking at the social and economic impact of the company on the town. Technical drawings also feature heavily in the collection and some of these are being identified by volunteers – especially items that require conservation work.

An unpublished manuscript of a Willans & Robinson history and its associated research files has also been deposited and a volunteer is checking these to weed out photocopies made from records already in the collection. The manuscript is being typed and it is hoped that the history can be published as it will provide a detailed look at the history of the company before it was first taken over in 1918.

Material identified in more detail because of the cataloguing and re-boxing includes catalogues, manuals and instruction books for products built by the company; Drawing Office instructions, orders and technical drawings; registers of engines and turbines built; legal material on patents and licences; and deeds, agreements and files on the site at Newbold Road, Rugby and for the short-lived boiler manufacture works at Queensferry in North Wales.

There are also details of contracts with councils and companies for supplying engines and turbines to generate electricity in the late 19th and early 20th centuries – an important part of Willans & Robinsons’ initial success. These contracts also show how the company got work overseas including in India, Australia, China, Belgium and elsewhere. Files on agency agreements and the creation or expansion of branch agencies (in the UK and overseas) also show how the company got orders worldwide. The Board, Company Secretary and administrative material includes minutes, files, reports and other papers that show the take-over of Willans & Robinson by Dick, Kerr & Co. and also the First World War work that included armament production, aeroplane engines, ships propellers, and submarine conning towers and diesel engines.

The personal face of the records

One final ‘story’ from the records – a reference in a register of documents to an agreement with Bilton Parish Council in July 1917 about a grave for an American workman Joseph McLean. This led to checking employment agreements with American workmen that came over in the First World War and confirmation that McLean travelled on the SS Cameronia in November 1915 to work as a moulder at Willans. A check of the Rugby Advertiser in 1917 shows that he died aged 57 while living at New Street, New Bilton, Rugby. He is buried at Croop Hill Cemetery at Addison Road, Rugby.