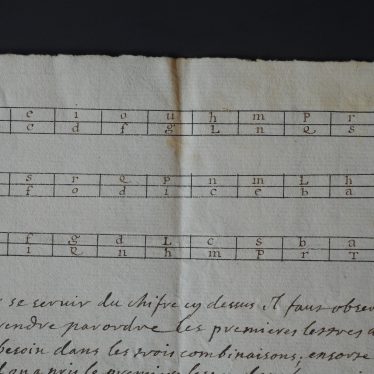 The cipher with which to crack Lord Feilding's code, with instructions in French
Warwickshire County Record Office reference CR2017/C157/2 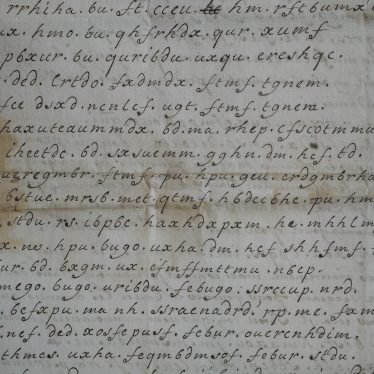 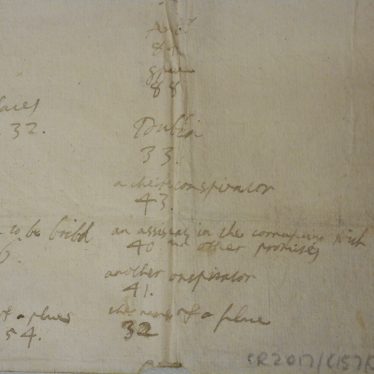 A contemporary attempt to decipher a numerical code without the key. Some of the numbers seem to refer to 'conspirators', and 'a man to be bribed'.
Warwickshire County Record Office reference CR2017/C157/3

The document taking the spotlight this month is quite unique and particularly fascinating. It is a coded letter written by Lord Feilding of Newnham Paddox, alongside the cipher with which to crack the code.1

Codes and the English Civil War

The letter seems to have been written at the time when Lord Feilding was ambassador in Italy for Charles I. This was only a few years before the English Civil War, when he was to turn his back on the king and become a commander-in-chief for the Parliamentarians. The letter does not name a recipient and is only signed ‘enfin je me les attache’.

In the bundle with these documents is another code, numerical this time, which seems to be in the process of being deciphered by someone who does not know the key.2 In the years before and during the Civil War, ciphers were a popular means of protecting information. Charles I himself used a number of different ciphers, many of which employed numbers rather than letters. It would be interesting to learn whether there are any other extant letters which made use of these particular ciphers.

Instructions on breaking the code

Some codes from the Civil War period have still not been deciphered. Fortunately for us, someone has been kind enough to write out instructions for the use of the cipher (albeit in French). It consists of three separate substitution ciphers, which are applied in turn to each letter. We do not know who designed the code and the handwriting in the instructions is different to that of the letter. Roughly translated, the instructions read as follows:

An example will clarify for now.

In addition, it is agreed that the first and third words in the line are null and void.

Null words and the breakthrough

The decryption process was arduous and at one point we nearly gave up altogether. We had not fully appreciated the sentence ‘it is agreed that the first and third words are null’. We initially thought that the sequence reset itself at the start of every word and that it was applied to every word. While some words were emerging – ‘deserteurs’ or ‘officiers’ – most of the code was simply translating into more gibberish. However, inspiration struck when reading an article about the Great Cipher of Louis XIV. His cipher was so successful because it used ‘nulls’ (deliberately gibberish code) to stop people analysing letter frequency and to throw would-be codebreakers off the scent. It nearly worked on us! We realised the meaning of ‘the first and third words are null’. By ignoring the first and third words of each line, and applying the cipher sequence continuously (without resetting at the start of each word), we were finally able to reveal the secret message.

Transcribed, but not yet translated

Using this cipher, we have been able to transcribe the coded letters into words. However, we are still in the process of creating a full translation of the French, so unfortunately the contents of the letter remain something of a mystery. We believe the letter mentions deserters, war, and something about France being ‘too miserable’. It speaks of offering protection to friends, the fidelity of officers, travelling to Paris, and the ‘sense, wisdom, spirit and courage’ of soldiers. If anyone would like to offer their assistance, particularly any knowledge of French (especially Middle French), we would certainly appreciate it.

Once the letter has been decoded fully, one can only imagine the insight it will give into the negotiations and activities of Lord Feilding in his embassy to Italy.

This article was Document of the Month for the Warwickshire County Record Office in October 2016. Further articles can be found on their website.