You are here: Home>Locations>Kenilworth>People of World War One: Dudley White of Kenilworth

People of World War One: Dudley White of Kenilworth 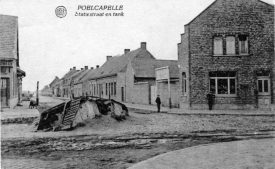 The tank between the wars, as the town is built around it.
Picture supplied by Susan Tall 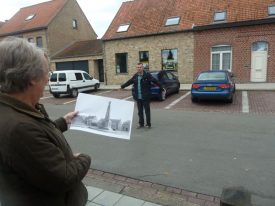 Johan shows where the tank lay after it was moved.
Picture supplied by Susan Tall 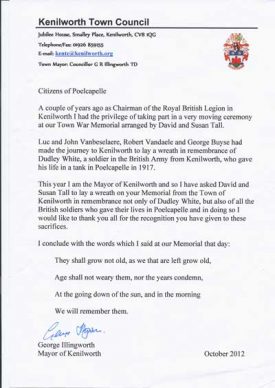 Dudley White died when his tank was hit by a shell at the crossroads in the Belgian village of Poelcapelle where the German army had its local headquarters and the Allies had totally flattened the whole village. (Poelcapelle is the French spelling of the town, as in World War I, now officially Poelkapelle in Flemish.)

In a letter to Mr and Mrs White, Lieutenant John Coghlan, commander of the tank Damon II in which Dudley died, wrote that Dudley was buried by the side of the tank in the centre of Poelcapelle and, as the tank remained in the village until 1941 and many photographs were taken, the place where Dudley was buried can be identified, as in the picture on the right, taken after the village had begun to be rebuilt.

In 1924 it was decided to remove the tank and it was put on a pedestal on the marketplace. Finally the tank was dismantled and taken away by the Germans in 1941 in their need for more iron.

In recent years and with the ever-growing interest in World War I, a group of history enthusiasts from Poelkapelle formed the Poelkapelle 1917 Association (or ‘P1917A’), and it is their dream to have a new tank or replica put back in the village centre, if possible on the spot where Damon II was left after the war. Local resident Johan Vanbeselaere has been working on making a full-scale working replica of Damon II, and the progress of the development of this replica is reported in the Poelcapelle1917Association blog.

After reading the book Kenilworth and the Great War, Johan Vanbeselaere realised the significance of Lt. Coghlan’s letter and that he could identify just where Dudley died and was possibly buried. He contacted Susan Tall and on a trip to England in search of caterpillar tracks and a small ceremony was held at Kenilworth War Memorial in memory of Dudley White.

Johan asked Susan if it was possible to find any living relatives of Dudley White as each year in Poelkapelle they have a day in remembrance of a particular tank or person and he planned to have a day devoted to Damon II. Susan after several months research was able to make contact with the Hunt family who are second cousins of Dudley. They were very interested and wanted to visit Poelcapelle. The visit took place on the weekend of the 5th-7th October 2012, and was attended by six members of Dudley’s family and the nephew of his Tank Commander, Lt. Coghlan. Susan and her husband David took a wreath from George Illingworth, the mayor of Kenilworth, and Susan read out a letter from him.

This is an abridged version of an article written by Susan Tall, local historian. Her website can be found at http://www.susantall.co.uk/