You are here: Home>Locations>Warwick>Hidden Medieval Houses in West Street, Warwick 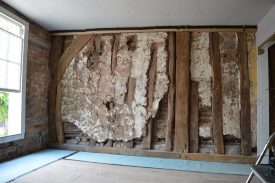 33 West Street also has exposed framing inside, particularly in the party wall with No. 31.
Photo reproduced by kind permission of Archaeology Warwickshire. 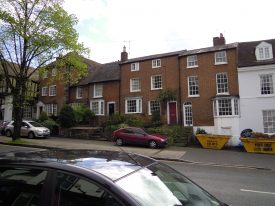 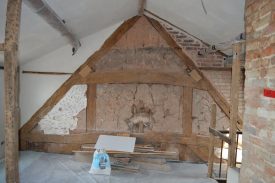 Look at some of the houses in West Street, and the brick frontages hint at the type of properties to be found elsewhere in Warwick after the Great Fire. Further inspection, however, reveals a story of the properties hidden from view. Nos.27-31 have substantial remains of a pair of semi-detached timber-framed houses (possibly originally part of a terrace of three properties) which probably date from the 15th century.

A sketch of the dwellings’ history

25 to 31 West Street form part of a range of houses (now numbered 21 to 33 West Street) which formed a single block of ownership. This block can be traced back to 1433, when it was described as a ‘tenement and two cottages adjacent’, which lay between Walkerstret (now part of Castle Lane) and a messuage of William Rychardes. The property had come to Stephen Fisher by 1544 when his heirs were paying a chief rent of 12d on each of two tenements to St Mary’s church. In 1575, the property was described as ‘divers messuages and cottages’, again listed as paying 4s chief rent, this time being paid by Richard Fisher. In 1595 his widow, Isabel, bequeathed three of these messuages to her two daughters1.

These were the original two cottages, one of which had been divided in two, and became 25-29 West Street, 31 West Street, and 33 West Street, all being recorded separately in the Poor Rate list of 1582 and in the Communicants List of 1586. They are all recorded as having common rights of grazing (for two mouths) in the earliest Commoners Roll of 1698.

Nos. 27-31 West Street all have brick fronts, which were built separately with different eaves levels but the same ridge line. The brickwork suggests that the buildings were probably refronted between the late 18th century and early 19th century. The refronting of Nos. 27 and 29 is consistent with the documentary evidence, which indicates that 25-29 was a single dwelling until sometime between the early 1770s and 1786, by which time it had been divided into three.

A clue to these houses’ past can be found inside, as this group have timber-framing internally. Corner posts can be found in both 27 and 31, whilst exposed timber framing can be found in 29 and 31. Evidence that the separate houses are of the same building structure can be found by the presence of scarf joints in both 29 and 31. There are also many other clues within that hint at the dwellings’ former structure and appearance.

This substantial amount of structural evidence shows that 25 to 31 (at least) were built as a single structure, as two dwellings, and it is possible that No.33 was also built as part of the same structure. The detailing, and the sooting2 in the roof space, suggests that the structure dates back to at least the late 15th or early 16th century, while documentary evidence from 1433 may indicate the possibility that it is earlier than this.

Ultimately, these properties show that you cannot judge a book by its cover nor, indeed, a house by its frontage. Delve deeper, and there are mysteries to be found.

1The other property (now known as 21 and 23 West Street) remained in the Fisher family until about 1711, when one of the three remaining heirs of Roger Fisher sold their share in it.

2Soot in the roof space (or elsewhere inside an old building) means that there was an open hall with a central hearth rather than a later hearth and chimney (which generally came to be inserted, or built as original, from the mid-16th century).