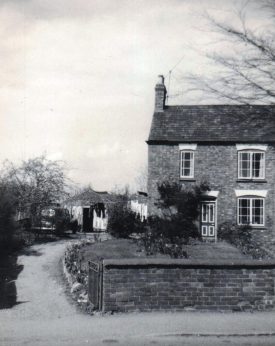 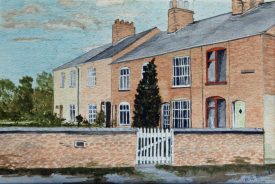 I was born at what was then no.11 Main Street, Clifton-upon-Dunsmore. My grandparent’s home was initially known as Pleasant Cottages, and later became no.1 Avon Cottages, Rugby Road, before finishing up as no.11 on the Main Street through the middle of the village. I lived there with my Mum (Margaret), Dad (Bert), Nan (Bertha) and Grandpa (Arthur) for two years while my parents, with the help of Uncle Stan Pogson, built a bungalow in Shuttleworth Road, but Mum had lived there since she was born in 1932.

My grandfather, Arthur Hydes, bought the cottage, one of a row of six, from the then Lord of the Manor when Mum was young, having rented it for years beforehand. Over the following years, an upstairs bedroom was turned into a bathroom and the downstairs community wash-house became an inside toilet and a new kitchen. The outside bucket toilets became redundant, although even in the 1950s – when I continued to visit as a child – the row of sheds out the back still remained, complete with the old toilets. During World War II, an air raid shelter was built along the front gardens by the road, which alongside the beech trees made an excellent playground for children, but had been removed by the time Mum painted the picture of the cottages in the 1990s.

While expanding on our family history, my sister Julia and I thought we would research the background of this row of cottages and although we have got back to 1871 when census records show they were there, we know they were not there in 1851, so when were they built?

Looking at the architecture of the row, the first two houses are larger than the last four and the census records show that the smaller cottages were originally 2 up and 2 down, while the larger two had five rooms. We also know that a lower room in the end cottage which my grandfather bought had originally been a communal wash-house for the six families. Prior to the cottages belonging to the Manor, we know they were sold to them towards the end of the 19th Century when the widow of the original owner, Mary Hewitt, died childless. By far the most amazing history belongs to those first forty years when they were in the ownership of her husband, one Henry Hewitt, the village miller – a very colourful character in his own right!

The most likely point of build appears to be about the time the terraced houses were built at Vicarage Hill and occupied by railway workers, and Avon Cottages’ earlier occupants were also mainly railway workers.

Although still unable to pinpoint when the row was built and how, we do know who lived in them during the late 19th Century and we also know the landlord, Hewitt, disagreed with his tenants and neighbours for various reasons on more than one occasion.Reading the resulting court cases in the Rugby Advertiser, it’s clear he had a volatile temper that was often associated with the brandishing of a revolver to strengthen his argument.

We are still researching the cottages and expanding on the families who lived there to be included in an exhibition at Clifton-upon-Dunsmore later in the year.