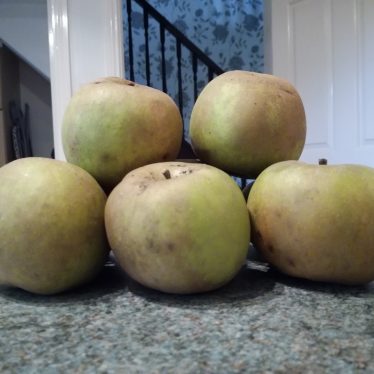 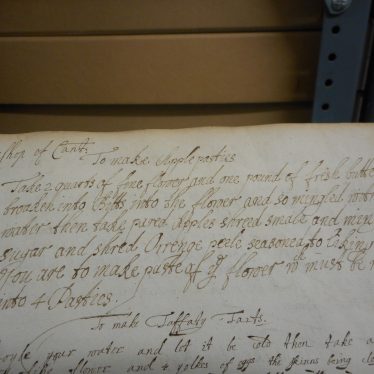 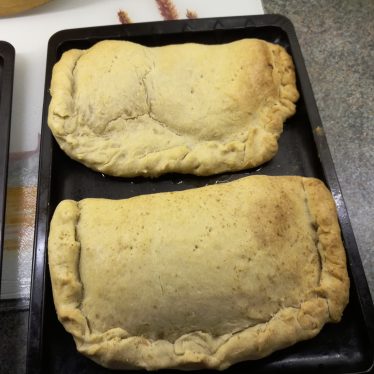 Divided into sections for cookery, preserving, physicke and chiurgery. Index at back. 350 pages.  This belongs to the Newdigate collection.  It is undated but estimated to be early 18th century.

I was approached shortly after arriving at Warwickshire County Record Office, and was invited to do the heritage recipe challenge. As I am not exactly a domestic goddess or indeed any kind of goddess, I thought I would go for something really simple, hence apple pasties. The only scary bit here was pastry, no resorting to ye olde worlde refrigerated aisles in the supermarket, but I wondered whether armed with an 18th century pastry recipe I might actually crack ‘pastry’.  Only six lines and five ingredients to the recipe, easy peasy!

What sort of apples would they have used? Most of the varieties we take for granted now are actually quite modern and even the trusty Bramley would be too recent being 19th century.  Having visited Ryton Organic Gardens’ shop, the very helpful staff confirmed that the Ashmead Kernel they had in was an early 1700s variety from Gloucestershire.  Delighted that I’d found something I could acquire at all which might have been around at the time, I grabbed eight large apples.

The ‘fine flower’ is measured by reference to two quarts. The books I have and the internet just confused me so I decided this must be a measure of volume, I suppose fine flour has a pouring quality, and plumped for four pints – that is an awful lot!  I did briefly consider what sort of flour would they have used but I am afraid I took the easy option here, so bleached plain it was.

One pound of fresh butter.  I probably should have made my own but I am a lightweight and bought English butter, salted which was probably a mistake. I duly broke it into bits into the flour.  Mmm… just adding water to flour with lumps of butter would probably not be good so I did decide to rub the flour and butter to get the classic breadcrumbs before ‘mingling with cold water’.  With such a huge volume of flour and butter I did get a bit impatient and added too much, giving me a large glutenous mass.

No measurements are used for the filling. I duly ‘shred smale’ (grated) my apples and mingled them with sugar.  I used caster, felt pretty sure they would have used white sugar of some sort.  For the shred orrenge peel, I just used one large orange.

‘Seasoned to liking’. What?  I guessed this was not salt and pepper but probably spices.  So I plumped for a bit of Allspice (1/2 tsp) ground cinnamon (1/2 tsp) and freshly grated nutmeg.  It tasted alright and the brown spices went well with the soggy brown mush the apples had become.

I need a bigger kitchen

There was way too much pastry to ‘rowle’ out on my kitchen work surface and for my filling.  The four original sized pasties must have been enormous.  I used only half the pastry mix.  As it was I ended up with four good sized pasties which filled my two baking sheets and were of such a weight that I just about managed to lob them into the oven.  One alone kept me and my husband going for days…

The recipe does not mention cooking the pasties at all but on the basis that pasty is generally something cooked I decided they must go in the oven and plumped for a hot oven about 200 celcius.  About 40 minutes later the pasties seemed a good colour so I took them out and left them to cool.

Verdict – What no potatoes?  They were OK, pastry a bit tougher than I would have liked but not as tough as some of my past efforts.