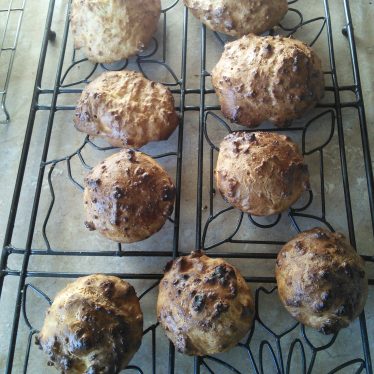 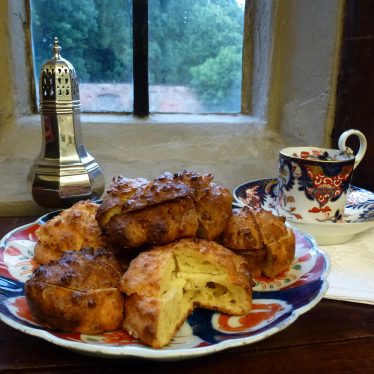 Cheese Loves. The cup and saucer are early Crown Derby and the plate is possibly Worcester, all with imari based patterns. The silver sugar caster is an 18th century design, but made in the 20th.
Image courtesy of Robert Pitt 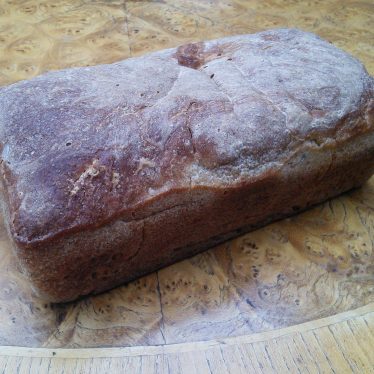 Whether the buns I produced are anything like the ones produced in 1650 one will never know. They were jolly tasty, but not sufficiently so to warrant all the time consuming ‘Manchet’ preparation. Was this time consuming method and relatively high-end ingredients an indication of ones status? If I were making this again I would just use wholewheat breadcrumbs! The curd making was fun. I quite fancy making some cheese of a cheddar type…

On reading the next section you will notice that it refers to manchet as being a medieval / tudor fare. Does that indicate that this recipe had earlier origins and was a sufficient favourite to be copied in to this much later volume?

For much of Britain’s history most bread was commonly made from a mixture of a coarse flour, often rye or barley.  This was Maslin Bread,  and it fed the lowest classes in Medieval society, and also made the trencher (bread plates) used in feasts to eat food off.

The exception to this was bread for the privileged few, made of double boulted (sieved through a cloth) stoneground wheat. This bread was Manchet, or Pandemain (lord’s bread) and was some of the best quality leaven bread eaten in Medieval and Tudor Britain.

Even so, this whiter manchet flour was desired by the rich upper classes because it made a lighter loaf, of finer texture. It was also far more expensive than mixed grain breads because it involved additional costs and labour and because a proportion of the grain (the larger bran particles etc.) was discarded in the boulting process, so that more grain was needed to produce the same amount of flour. Therefore this whiter, finer bread was a status symbol for those who could afford it.