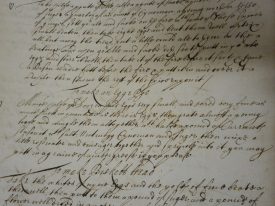 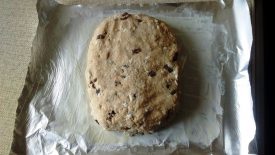 The egge pye before cooking.
Image courtesy of Laura McCoy 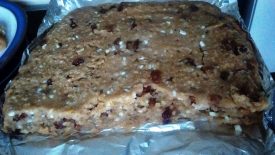 The egge pye needed a little longer to melt the suet.
Image courtesy of Laura McCoy

I signed up for the heritage cooking challenge as I like cooking, and I thought I’d be able to give it a decent attempt…

Looking through the list, I thought I would go with one of the oldest recipes1, as I’m interested in how food has changed over the centuries. The ‘Egge Pye,’ caught my eye; I like eggs, I like pie, win win right?

My first challenge was actually reading the recipe, and here I failed miserably as I could only get a vague sense of what was going on. Fortunately Sharon, who works at the County Record Office, is very practised in deciphering old script and she very kindly transcribed it for me.

They want you to add… what?

Ambergris?!? Usually ambergris is used as a perfume fixative. Although I’m sure this  was a sought after cooking ingredient in its day, adding a level of luxury, like modern day truffle oil, caviar or gold leaf, the thought of adding Sperm Whale sick did not appeal, so I did not, ‘please’.  Also, it’s about £10,000 a kilo, so even a ‘grain’ would probably add an unreasonable cost to the project.

Working out the weights and measures of most of the ingredients was fairly easy, but how big is a penny loaf? I don’t think it would be the same size as a loaf today. In the end I just had to guess from texture and compare the quantities of a modern day suet based pudding. This thing was going to be HUGE, and as the recipe was put together by someone who was probably catering for a lot of people, I decided to halve the ingredients.

There was also the fact that I was cooking with something I’ve never used before – rose water. I managed to find some fairly easily, but what is a sprinkle? The only vinegar I had was balsamic, and I wasn’t sure what vinegar would add to the flavour in general, but maybe the acid in it worked some magic, so I put in a dribble of it. I only wish I’d done the same for the rose water… It was a small bottle, about 60ml, so I just put all of it in.

I assembled all the ingredients but there was no mention of what to use to bind it all together and it was very dry, so I went off a jam roly-poly recipe and added about 50g of butter and water. I added enough water until it was fairly elastic and came to a consistency that bound everything together. Again, copying the roly-poly, I greased and wrapped it in some foil and put a large tray of boiling water in the oven on the shelf below, steaming it for over an hour at around 160 degrees Celsius. I took it out after an hour to check it, but the suet still needed to melt in the middle, so I put it in for a bit longer.

The texture was great, just like your average steamed pudding, and it smelled wonderful and very rosy! The taste? Terrible. I had no idea that rose water was so strong. I’m sure those of you that have used it before are shaking their head at the screen thinking, ‘what a muppet’, but I just had no idea, and it was such a little bottle. I guess it’s like vanilla essence or food colouring, you just need a tiny bit. It’s such a shame, there’s a huge pudding on my sideboard and I wouldn’t even feed it to a dog.

As promised, I brought some of the Egge Pye to the County Record Office for everyone to try, and all of them agreed and said that it looked and smelled very nice. All of them also agreed that the rose water was enough to take the roof of your mouth and that they could only eat the tiniest bit.

1 The catalogue entry reads: Paper book in limp vellum cover entitled (on flyleaf) “A Collection of Receipts both Phisicall and Chirurgicall, by my Honoured Mother, Isabella Fetherston, 1662: Thomas Fetherstone”: several pages have been cut out following the title and the remaining recipes at front and back of the book date from about 1719.