You are here: Home>Locations>Baginton>Surviving the Coventry Blitz 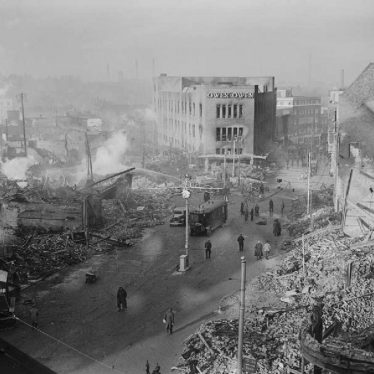 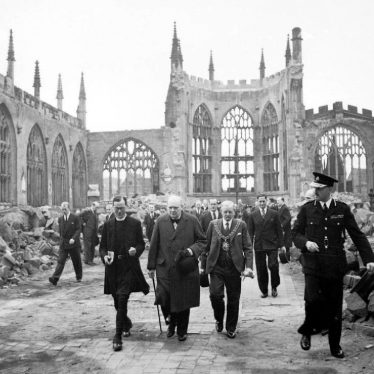 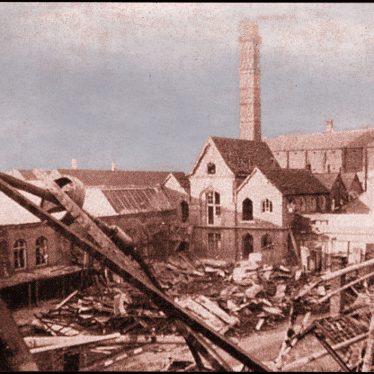 I married Ken Ashford on 23rd December 1939. He was a Coventry kid. We met at my Grandmother’s house. I moved to Coventry where we lived with Ken’s father and mother. I was 19 and Ken was 30 years old.

Ken worked at Baginton on Whitley Bombers. He was moved from Armstrong Siddeley cars with a few of his workmates to get the aircraft set up. A lot of girls from Barwell who had been in hosiery factories had been conscripted to work at Baginton. Ken was their leader. Many of their husbands and boyfriends never returned from fighting in the war which was very sad.

The night of the Blitz

On 14th November 1940 Ken had the afternoon off so we went to Warwick to see his mum. We caught the red bus in Warwick about 6:45 pm. When we got back to Coventry at about 7:30 pm, the town was ablaze! We couldn’t go any further so we walked along Earlsdon Avenue until we reached home.  A German plane dropped a stick of bombs.  One hit the Standard paint shop, one hit Bunty’s Garage and the third one dropped in the garden opposite and killed a lady in the shelter opposite.   We were caught in the blast but weren’t hurt, except Ken had cut his finger badly.

Afterwards, my mother in law went to the butcher’s in Sir Thomas White’s Road and he said “Have you seen your face?”  It was black from the soot that had come down the chimney during the bombing. They had a good laugh about it.

A move to Whitley

In 1941, we moved to Whitley where I had a job inspecting nuts and bolts from bombers. I worked there for five years on £3 and 5 shillings from 7.30 am to 5 pm every day. Ken was an ARP warden as well as working nights in the factories.  There was a surface shelter opposite our house and a few of us went there with jugs of cocoa to help keep us warm as sometimes the raids went on for a long time.

Ken and I were married for 61 years. Ken died Boxing Day 2000 aged 91 years. We never had a family which we both regretted but we were quite happy.

Originally published on the BBC’s WW2 People’s War website as the article Coventry Memories. This article has been reproduced with permission of the BBC, and Warwickshire Libraries.