You are here: Home>Locations>Leamington Spa>Happy Memories of Victoria Park, Leamington 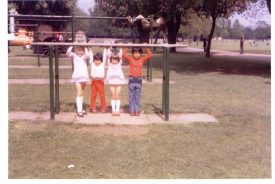 Me with my brother and cousins in the summer of 1973 on the monkey bars.
Image supplied by Louise Jennings. 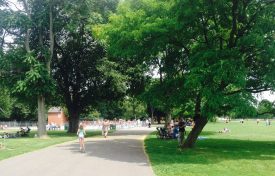 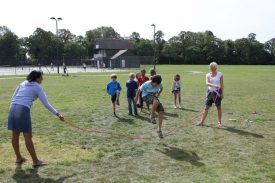 Skipping fun with family and friends, tennis courts in the background.
Image supplied by Louise Jennings 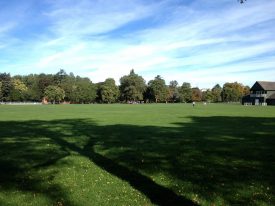 I am lucky enough to live near Victoria Park, and also as a child my Nan lived in the house I now own, so I have visited the park nearly every week of my life. The park area, Victoria Street and Victoria Road were originally cricket grounds developed by John Wisden (there is a brown plaque on The Cricketers pub in Archery Road). The park was developed as we know it now in 1899 to commemorate Queen Victoria’s Diamond Jubilee and I understand that the Royal Show was held there at one point before it moved to Stoneleigh.

I have many happy memories of the park in the 1970s. Highlights include the Witches Hat ride and the large green slide (it was painted yellow at some point). It was very high, and I am sure it probably got removed when health and safety rules were put in place. I also loved the concrete tunnels that you could climb through, but there was always a large muddy puddle at one end. The large rocks which you can jump across are still there, and then there was the steam roller which as a teenager was a meeting point for friends.

The paddling pool use to have an elephant that squirted water from its trunk, it was obviously put there to tie in with the history of elephants to Leamington.

In the 1970s I remember Billy Smart’s circus visiting each year. I would go with my Nan and watch them putting up the big top. We would always go and watch the show, but my favourite bit was wandering through the park in the daytime and seeing all the animals in their cages; I also loved seeing the performers practising.

At some point, I think it must have been in the 80s, part of the park was made into an extra green for the bowling club. On that piece of land there was a seated shelter, and several roundabouts that we use to lie on and spin around. There was also a large clock at the Archery Road entrance, which we would check to see what time we needed to be home.

Sports in the park

The tennis courts have expanded into the park and I can only remember them being clay and not grass so not sure when that happened. The old tennis courts are now a makeshift car park. There was always a cricket pitch in the middle of the grass (I think that disappeared in the late 1990s as I remember watching the local Cricketers public house having a match there). The cricket pavilion is still there but is now occupied by the tennis club. The circular track around the park is exactly half a mile so is frequently used by people exercising; it has also hosted running and cycle races. As the track is flat and safe it is ideal for children to cycle, skate and scoot; I learned to ride my bike without stabilisers here and my two children have done the same, along with many Leamington kids.

The avenue of trees around the track was planted in memory of men and women who fell in WWI; there is a rock with a plaque by the entrance to Archery road with the details. Last year some of the trees had to be felled due to disease. The park is great in all seasons, and in Autumn you are guaranteed to collect some conkers – there are always lots of squirrels around. My mum (who is now in her 80s) remembers swimming in the river near the park – she claims the water was clear, but looking at it now it’s hard to believe. As a child I remember going down to the river’s edge and feeding the ducks, but I think most of the ducks are now in the Jephson’s.

I have spent many happy times as a child, and now as an adult, with my family and friends in the park celebrating birthdays, enjoying sunny days, and playing in the snow. The park is always very busy on sunny days and it’s great to see families, kids and groups of students enjoying the open space. I love it, especially on summer evenings and on crisp winter days, and even when it’s busy you can always find a place to sit and relax.

What memories of the park do you have?