You are here: Home>Locations>Harbury>Memories of Harbury 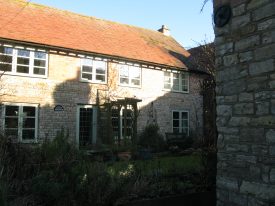 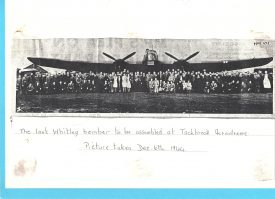 I came to live in Harbury in 1933 and in April 1939 married my late husband, Raymond Ceney and lived with his widowed mother Mrs Sarah Ceney in the cottage known then as ‘Temple Cottage’. This has recently been re-named ‘Chain Cottage’. My husband was on the reserve list of the Coldstream Guards and was called up on September 1st 1939. My son Tony Ceney was born in March 1940 and my husband was reported missing in June.

When the bombs fell

We continued to live in the same house and were there when the bombs fell on Harbury. I’m not sure how many bombs actually fell; two or three fell in the fields in Bush Heath Lane (but luckily missed the search light battery). Then one fell in the farmyard behind the cottages where ‘New Stone House’ now stands.

My brother-in-law, Basil Ceney, his wife and baby daughter were staying with us. They had walked all the way from Coventry, pushing Ruth in her pram, after their house was damaged in the Coventry Blitz the week before. We sat listening to the enemy bombers going over as usual, on their way to Coventry, not expecting our village to be the target, when suddenly the door burst open. Joyce, our evacuee from Dagenham, was upstairs in bed when the bedroom ceiling started showering plaster down on her. I remember standing half way up the stairs holding Tony in my arms and calling “Joyce, Joyce, don’t be frightened, come down to me”.

We realised how very lucky we were when we saw the state of Temple House and the cottages the next day. All traffic was diverted, barriers being erected above and below the damaged houses until they were made safe. The leaded windows in Temple House were all buckled and twisted and quite a lot of damage done: it was repairable, but the cottages had eventually to be pulled down.

In the one next to what is now known as Temple House Cottage lived a Mr and Mrs Beaney and their son Peter. On going upstairs after the ‘All Clear’ siren, they found a piece of shrapnel embedded in one of the pillows, which could have been very nasty had anyone been in bed. Several of the other cottages round about which hadn’t had their chimneys swept, suddenly found themselves and their furniture all covered in soot, but luckily no further damage. Several months later, an unexploded bomb was found in a garden at the back of the cottages where I lived, but it was safely removed by the bomb disposal squad.

A couple of years later I went to work at Tachbrook Aerodrome as Receiving Officer in the stores. This was where the Whitley Bombers were brought to be dismantled, then all the components were sent to Coventry for repair. Then they came back to Tachbrook to be assembled. It was quite interesting work, making certain everything was there from fuselage and Rolls Royce engines down to the group boxes containing split pins, castle nuts and such like, then seeing the plane gradually built up until it was ready for testing. If all was well a pilot then took it back to Base. We did have a couple of hair-raising events; one plane crashed on the air-field on landing, but the pilot got out, shaken but unhurt. Another crashed right across the road outside the aerodrome, but I don’t remember any details.

I now live in Leamington, but my son, his wife and family still live in Harbury, as do Basil and Maurice Ceney and their families. Attached is a photograph of the very last bomber to be assembled with some information. I am one of the girls in the front row.