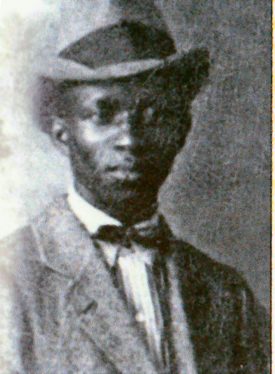 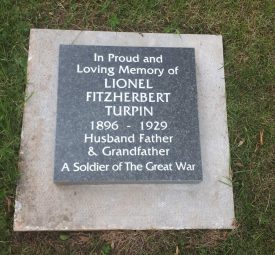 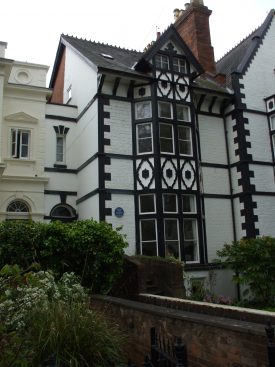 The house where Lionel Turpin lived with his young family in Leamington.
Image courtesy of Benjamin Earl

One of the difficulties of writing about the contribution of Black soldiers during the First World War is identifying who was Black and who wasn’t. If they served in the British West Indies Regiment you can be reasonably sure they were Black, unless they were an Officer in which case you can be pretty sure they were White! Occasionally surviving service records give a clue, sometimes a big clue, for instance when a recruit’s hair is described as ‘wool’. But often we only know a soldier was Black because surviving relatives told us so. It helps if a surviving relative achieved some sort of fame themselves. A case in point is Lionel Fitzherbert Turpin.

Turpin had two sons who achieved a degree of fame through boxing. Randolph Turpin was briefly world middleweight champion. Unlike his brother, Jackie Turpin never became world champion but he did co-author a book about his life (‘Fighting Jack – You Gotta Fight Back’) and, in it, he talks with pride about his father’s service during the First World War. There are photos of Lionel too so there is absolutely no doubt about his ethnicity.

Unlike many soldiers, some of Lionel Turpin’s service records survive and there is a reference there to his next of kin residing in Georgetown, British Guiana. On its own that wouldn’t prove Turpin was Black but, even without photos and written evidence it would have offered a clue, but without the evidence provided by his sons it would have been difficult to tell just from his army records that Lionel Turpin, Private in the Warwickshire Regiment of the Kings Royal Rifle Corps, service number A202638, was anything other than White.

Lionel’s army records are quite badly damaged so we can only get a partial picture of his service, but we do know that he served with the British Expeditionary Force in France in 1916, 1917 and 1918. We also know that he was ‘wounded’ in September 1918 and ‘gassed’.

He survived but his son Jackie talks about the pain his father suffered from his wounds and also the adverse impact of the gas on his lungs. He eventually died of capillary bronchitis and emphysema in a Birmingham hospital on 6th March 1929 and was buried on 13th of that month.1 Soldiers who died as a result of their service were commemorated by a Commonwealth War Graves Commission headstone, but only if they died before 1st September 1921. Although there is no doubt Lionel’s death was due to his service, he lived for several years beyond that date and so did not qualify for a CWGC headstone.

At Historycal Roots we can’t claim any credit for ‘discovering’ Lionel Turpin.2 What we can claim is that we identified the exact location of his grave while others had failed. Armed with the information, supplied by the local authority, that he was buried in plot 70, grave 119, we visited the cemetery in Leamington. Unfortunately in that part of the cemetery we found only a large expanse of grass with occasional headstones dotted around and it was clear that none of them commemorated Lionel.3

We tried pacing out from the headstones that were present to get a rough idea of Lionel’s final resting place. We would have had to settle for that were it not for a stroke of good fortune. We spotted an important looking chap a few hundred yards away and approached him. It turned out to be Alan Tucker-Lee the manager with responsibility for the cemetery. Yes, he said, he did have the plans of the cemetery in his car and with said plans in hand and Alan’s help, we were able to identify the exact spot where Lionel is buried. Sometimes the gods just smile on you!

Alan also showed us the grand grave of Randolph Turpin and we later visited the house in Willes Road, Leamington where Lionel lived with his young family. There is a blue plaque on the house but it commemorates his son, Randolph, rather than Lionel. We can’t help feeling it shows rather skewed priorities that the father who fought for his country and eventually died of his wounds lies in an unmarked grave while his son, a boxer (albeit a good one) is commemorated with a handsome grave and a blue plaque.

1 The death was announced in the Leamington Courier on the 15th.

2 Both Stephen Bourne (in his book ‘Black Poppies’) and Ray Costello (in ‘Black Tommies’) were there before us.

3 To read about how Lionel’s grave now has a marker, please follow this link.

This article was originally published on the Historycal Roots website. To view the original article, please follow this link.