You are here: Home>Locations>Warwick>The Warwick Pageant of 1906: Legacy

The Warwick Pageant of 1906: Legacy 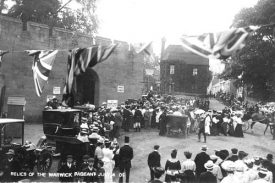 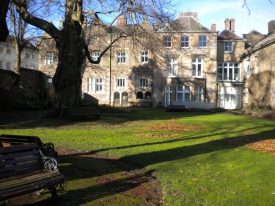 The rear of Pageant House - headquarters of the Pageant in 1906, bought after with the profit and presented to the town.
Photo reproduced by kind permission of Paul Readman.

The pageant of 1906 was accounted a great success, and did much to raise the temperature of the ‘pageant fever’ developing in the wake of the Sherborne performance. With the exception of that on the opening day, all performances seem to have been sold out, with visitors coming long distances (some travelled from the United States) to see the show. Warwick itself was en fete throughout pageant week. Businesses closed early, the pageant properties (including the impressive head of the monstrous Dun Cow) were displayed in the streets of the towns, and the local press carried very extensive coverage of the performances and associated events. These latter were numerous, and ranged from a celebratory civic luncheon held by the mayor, to an exhibition of watercolours of ‘Old Warwick’ and ‘Shakespeare’s Country’ at Warwick Castle, to a competition inviting members of the public to guess the weight of ‘exceptionally large pieces of coal’.

Warwick hosted other pageants after 1906, notably those of 1930 and 1953; and more recently still one was staged in 1996. But the pageant of 1906 was the largest and most elaborate of all held in the town, and its traces are still very visible in the place today. Pageant House and Gardens remain as physical memorials to the event, the former now housing Warwick Registration Office and the latter being very popular with locals (not least as a venue for wedding day photographs). Furthermore, the pageant continues to function as a focus for civic pride. In the newly-refurbished tourist information centre the visitor can watch film footage from the pageant as part of a display devoted to the event, which is described as a great success not only in meeting the challenge set by the Sherborne example and generating funds for the purchase of Pageant House and Gardens, but as evidence that, even in 1906, Warwick ‘knew how to entertain its guests’.

This is the third article on the Warwick Pageant of 1906. Articles about the Preparations and Pageant Week can be found by following the links.