The WI in Warwickshire

The WI celebrates its centenary in 2015 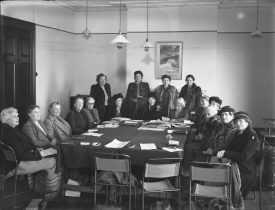 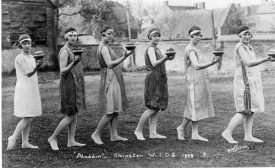 The first Women’s Institute in Warwickshire was formed in April 1917, now known as Tysoe WI, the original title was “Compton Wynyates in association with Tysoe”, as the Marchioness of Northampton was very involved with the formation. Newbold-on-Stour WI was formed in June 1917 and Kineton WI in September 1917. Apart from these three WIs, the suggestion to form a Warwickshire Federation came privately from Lady Willoughby de Broke, through the Secretary of the Women’s Franchise Association, and publicly through a meeting called by the Mayor of Royal Leamington Spa and the Vicar of the Parish Church, in November 1917. Mrs Alfred Watt, WI Organiser for the Agricultural Organisation Society, was the guest speaker.

As a result a Committee was formed with Miss Bryson, formerly Secretary of the Warwick and Leamington Women’s Suffrage as the first Federation Secretary. The Committee went to work in earnest, in spite of transport difficulties, to interview residents in villages throughout the county, with a view to rousing interest in the WI.

First Council Meeting of the Federation

In March 1918 the first Council Meeting of the Federation was held in Leamington Town Hall, attended by delegates from all the villages in which WIs had been started. The rules were adopted, an Executive Committee elected and the decisions ratified by the National Federation of Women’s Institutes. The Warwickshire Federation was born.