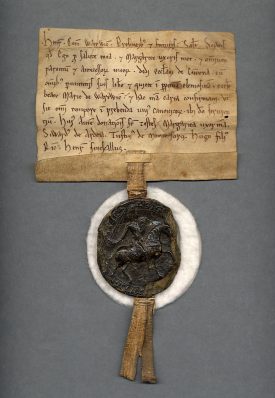 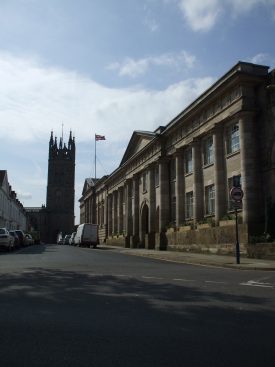 Deed announcing the transfer of ownership of the church of Cutona to St. Mary’s, Warwick

This deed1 is one of the oldest documents that the Warwickshire County Record Office holds. This deed is undated, (most deeds of this date were); but we know it must be before 1119 AD, because this is when one of the witnesses died. It is probably dated after 1100 AD, considering the style of writing and the phrasing of the deed.

The role of women

The deed is particularly interesting because of the light it throws on the position of women in medieval society. One of the witnesses of this deed is a woman, namely Henry’s wife, Margaret. At this time a married woman had no legal identity and any property she possessed as a single woman was surrendered to her husband upon marriage to him. However, Margaret’s parentage conferred upon her noble status: she was the eldest daughter of Geoffrey, Count of Perche, and of Beatrice, daughter of Hildiun, fourth Count of Montdidier and Roncy, and this may have influenced Henry’s choice of her as a witness.

While the possession of noble status may be influential or not, the status of widowhood most certainly empowered women. Widows were actively involved in the purchase and sale of land, the handling of loans and the making of donations to religious houses. During the 12th century widows were given the right to the dowry they received from their own family and the dower they received from their husband’s family, in order to safeguard family estates by preventing their fragmentation.

The presupposition of the lineage and its preservation here proved highly favourable to widows, but long-lived widows of old posed a major problem to landed families. An example of such a case is with the Beaumont family, where as a result of the widows living for a lengthy period of time the Earls of Warwick were unable to take ownership of their family estates and thus prevent them from being broken up and distributed.

Henry, Earl of Warwick, greetings to all present here and in the future. Know ye that by my greeting and that of Margaret my wife I gave the church of “Cutona” [Coton?] to St. Mary’s Warwick with all its properties freely and quietly for perpetual alms for all my family and ancestors and confirm this gift by my charter so that there shall for all time be a prebend to serve the canons there. This same gift here testified: Margaret my wife, Siward of Arden, Tustus de Monte Forte, Hugh son of Richard, Henry the Seneschal2.

2 The Steward (official) in charge of the day-to-day running of the castle.

This article was Document of the Month for the Warwickshire County Record Office in January 2012. Further articles can be found on their website.