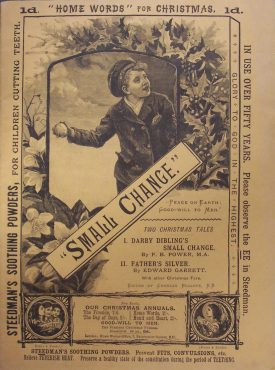 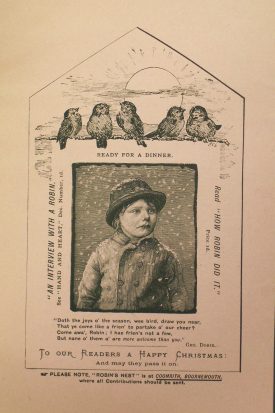 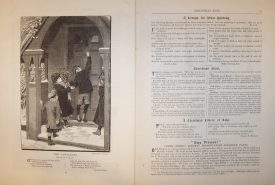 Now that Christmas is just around the corner we wanted to select something seasonal to highlight from the Warwickshire County Record Office, and we think this December 1892 edition of Home Words… fits the bill perfectly.

Home Words for Heart and Hearth was published nationally from 1871, often incorporating a local parish magazine.  Our example features the local magazine for the Parish of St Michael in Wolford.  We have an almost complete set of this magazine from 1892 and 1893, gifted to the record office in 2009.

This seasonal edition features two fictional tales as well as Christmas and New Year messages from the editor.  The page we are displaying here offers some enjoyable ‘Christmas Nuts’, bite-sized items which include a recipe for plum pudding in song form, along with a series of amusing observations on life and its peculiarities.

Astonishingly this magazine also still contains an original leaflet, also displayed, collecting contributions towards the ‘Robin Dinner’. This was a yearly Yuletide feast organised through the Home Words… office, hoping for a time when ‘every poor child in London will know by happy experience what a Robin Dinner is’.

What was Home Words for Heart and Hearth?

Parish magazines, particularly within the Anglican Church, are still distributed widely today.  They vary in quality, but originally they were important in supporting literacy for the newly educated as well as bringing the Church’s influence into as many homes as possible.

The Home Words… publication was founded in 1871 by the Reverend Charles Bullock, Rector of St Nicholas, Worcester.  He wanted a periodical that would be published nationally, but would also have local interest; as such, local advertisements and features written by the local clergy were inserted into the national edition. Readership increased to 90,000 a month after just one year of publication.  Four years later it was 250,000 a month, and by 1964 it had reached a peak of 1,100,000!

In an age when the general population of Britain was only just becoming literate, the Rev. Bullock’s attempts to offer reading material to the working classes were almost revolutionary.  He firmly supported working class book ownership. The featured content was interspersed with advice, proverbs and quotations which split the layout into bite-sized pieces. These were easier to read and more appealing to consumers – mirroring as they did the style of contemporary secular periodicals.

In his will the Rev. Bullock left a publishing empire and £52,560 to his family, directing that copies of his books should be given to London street missionaries, his old parishioners, and their children.

Charles Bullock was born in 1829, and educated at St. Bee’s College, Cumberland. He was ordained in 1855 to the curacy of Rotherham, Yorkshire and became curate of St. Nicholas’, Worcester in 1859, succeeding to the rectorship in 1860.  He held this post for 14 years.  In addition to Home Words…, the Rev. Bullock also edited The Fireside  (first published in 1864) and The Day of Days, for Sunday reading.

This is December’s Document of the Month for the Warwickshire County Record Office.  Further articles can be found on their website.