You are here: Home>Locations>Church Lawford>A Christmas Card With a King's Newnham and Church Lawford Link, 1868

A Christmas Card With a King's Newnham and Church Lawford Link, 1868 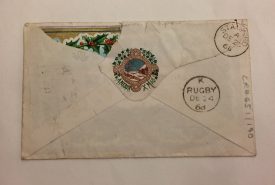 The back of the envelope. The two postmarks from Rugby and Stamford are marked clearly. See also the charming seal design, 'A Merry Xmas' and the tiny embossed heart-shape, which is the mark of the manufacturer.
Warwickshire County Record Office reference CR4651/190 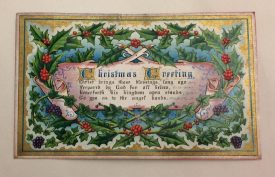 The Christmas card itself, with a poem expressing the religious sentiment of the occasion.
Warwickshire County Record Office reference CR4651/190

As the festive feeling rolls around again this year, we thought it fitting to offer you something full of seasonal goodwill. It is one of the oldest Christmas cards that we hold here at Warwickshire County Record Office, dates from 1868, and is addressed to a Miss Healy at Barn Hill, Stamford (in Lincolnshire). Mary Healy eventually married into the upper-middle class Townsend family of Church Lawford and Kings Newnham, and the record office holds a collection of the family’s personal papers. The card may potentially have been sent by William Henry Worth Townsend, who would marry Mary Healy two years later.

The tradition of sending Christmas cards was still in its infancy when this particular one was sealed and stamped. The production of the first commercial Christmas card, in 1843, is generally attributed to two men – Sir Henry Cole and John Calcott Horsley. It wasn’t all plain sailing, however, and they were condemned for promoting drunkenness.

No doubt postal reforms helped the Christmas card industry to boom. In 1840 the Penny Post was introduced by Sir Rowland Hill. Previously the fee for the delivery was paid by the recipient of the letter, not the sender, and took into account distance as well as the amount of paper used. As a result of the reforms, the amount of chargeable letters rose exponentially1. Like millions of others, this Christmas card to Miss Healy made use of the new service, as seen by the Penny Red stamp on the envelope2.

Makes quite a pretty penny

Sending Christmas cards is still, even in this digital age, a popular and lucrative business. Although stamps sadly no longer cost one penny, many of us will still choose to send Christmas cards to our friends, colleagues and relatives, just like this unknown sender did 150 years ago.

This article is December 2016’s Document of the Month for the Warwickshire County Record Office. Further articles can be found on their website.

2 A successor to the Penny Black.