You are here: Home>Locations>Bramcote>Bramcote Barracks 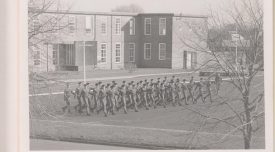 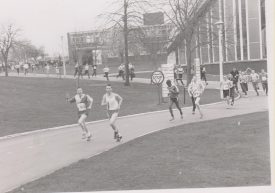 Bramcote Barracks started life as an RAF base. I was there 1977-1978, straight from school. All of my family worked at Fieldings and Johnsons factory in Attleborough. One day I decided to skive off school, and it was a choice of either going into the factory with the rest of the family, or doing something else. So I skived off school, happened to pass the Army career’s office, the next thing I knew I had a great big army bloke behind who said ‘you coming in lad?’ and the next thing I knew, I’d joined!

To begin with I thought, what the hell had I let myself in for? Bramcote was a training regiment, you carried on your education there and learned how to be a soldier as well, and learned a trade there, which would be oriented round the artillery. I learned how to be a computer operator, we learned how to direct the big guns to point in the right direction, hit their targets. The computers had big ticker tape. We’d have to put the weather data into the computers, to take into consideration for the distance.

Different to what I was used to

It was very different to what I was used to. Straight from school to army, the discipline, the fitness. We’d have to run regularly daily, and the first six weeks they really drilled the discipline into you, that either made or broke you. You were given the chance to leave if at that point you thought it wasn’t for you, quite a few did. We also had a few medically discharged, due to sports injuries.

The Juniper restaurant, we just used to call it the cookhouse, and was run by the army catering corp. It was three meals a day, you’d form as a troupe outside your accommodation block, marched down there, and would have about two minutes to eat your food before you were marched out again. It was always good food, better than what they get now.

I’m still in contact with a couple of people, the discipline brought us together, and there were competitions with other troops, and you’d have to bond together, to win the competitions. When I left Bramcote, I went to Germany, straight into training for Northern Ireland. I knew someone who was also a junior leader at Bramcote who also went to Northern Ireland, and he got killed. I go to the National Memorial Arboretum each year to remember him.

After three years of the army I came out, came back to Nuneaton, met a girl and got married. Bramcote was still junior leaders until 1993. I’d see them around town and think I used to be one of them. I first went back about three years ago. I go to the reunions held by the junior leaders association in Coventry every year, that keeps me interested in the history of Bramcote.