You are here: Home>Locations>Knowle>Berrow Cottage Almshouse in Knowle 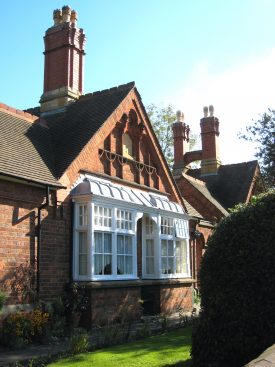 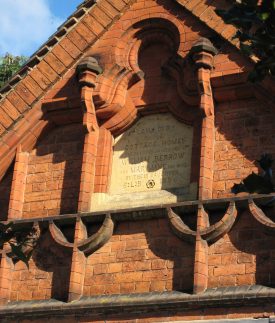 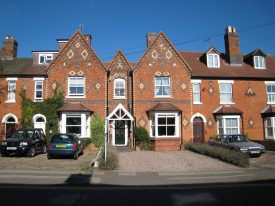 The Berrow Cottage Homes stand on a former bowling green on the corner of High Street and Kenilworth Road opposite the parish church of Knowle.

This almshouse was founded in 1885 by Sara Letitia Berrow in memory of her parents. Originally there were four units built of red brick with stone dressings and a plaque stating: ‘LAUS DEO THESE COTTAGE HOMES WERE ERECTED IN MEMORY OF WILLIAM BERROW AND MARY JANE HIS WIFE BY THEIR DAUGHTER S:L:B 1886’. The architect was William Hawley Lloyd of Birmingham; the original buildings are Grade II listed and display exuberant buttresses between the chimney stacks.1

The gardener’s house ‘Clinton Cottage’ was converted into three more homes in 1891. Clearly the charity continued to prosper, because a block of 22 more flats was added for the Queen’s Jubilee and opened in 1978 by the Bishop of Birmingham. Finally, after a successful appeal for funds, a community block was added in 2009. The almshouses are now run by the Berrow Cottage Homes Trust.

The original intention was to support poor aged people. The inhabitants in 1901 were rather genteel: they included two retired schoolmistresses and a woman ‘living on own means’. The fourth occupant – Rebecca Hetherington – was the only one born locally, in Birmingham.2  By 1928 there were five ladies living in the cottages: Miss Johnson, Mrs Harris, Mrs Davy, Miss Dobbs and Miss Lee. They each received a pension of £13 a year plus a gratuity of £4 for coal. When Mrs Davy died, they advertised for a new resident in The Record, Life of Faith and The Christian, and Miss Wilkinson was chosen to replace her.3

Some accounts for the charity are cared for by the Warwickshire County Record Office. Around 1930, the trustees were renting out the land attached to Clinton’s Cottage for £19 2s 4d a year to Mr Edwin Clutton for use as a market garden. They were also receiving a healthy income from investments. Expenditure included a 15 guinea annual payment to Dr Whatley, for attending when needed, and a subscription of £1 a year to the Knowle Nursing Association. Other expenses covered gardening, regular repairs and maintenance, insurance and rates etc.  The trustees included the  vicar of Knowle ex officio and in 1928 Henry Major, a solicitor, and Edward Mansell an architect, both from Leamington Spa.4

Linkedin
More from Knowle
More from Almshouses and Charity