You are here: Home>Locations>Knowle>VE Day in Knowle 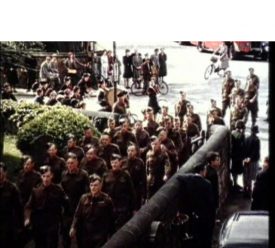 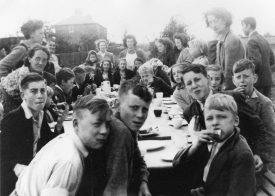 The end of the war in Europe

As the war drew to a close in April 1945 Knowle Parish Magazine says little about world events: nothing appears about the end of hostilities until the report of the VE Day celebrations in June. A diary written by long-standing resident Eva Wootton provides an insight into Knowle in the final days of the war:

May 7th. Heard at a Mothers’ Meeting on 3 o’clock news that Germany had signed an unconditional surrender in Germany … I put up my flagpole and 10ft by 4ft Union Jack this evening! We saw the church floodlit tonight.

(Piers Milne also recalls his family’s putting a Union Flag out of a window on a long washing line prop – and that everyone did the same.)

May 8th. Mr. Churchill broadcast the great news that this war is over at 3 pm. Everyone is overjoyed, but we are taking it very soberly. The combined service tonight was packed to suffocation and we rang and fired the bells for 1¾ hours. I have never before felt such a wonderful sense of release and deep happiness.

May 9th. A general holiday to celebrate the end of the War in Europe.

May 10th. We did not, and have not, forgotten our men still fighting in Burma.

Thoughts from the vicar

Thanksgiving was truly the note which was struck in Knowle…  we are proud of the orderly behaviour of all the people of the village.

For the first time in its long history our Church was floodlit, and the lovely picture it presented will be an abiding memory with all of us as long as we live. The Service of Thanksgiving on VE Day filled the Church to such a degree that ladies were even standing in the pulpit.

On the Wednesday night at 11 o’clock, the Vicar and Choir led community singing of well-known hymns, and judging by the letters of appreciation which we have received, the picture of the floodlit Church and the robed Choir, and also the singing of the large crowd which assembled, will never be forgotten.

The attendance at the Sunday Thanksgiving Service was even greater, but more adequate seating arrangements had been made. The parade of Service and other units consisted of 330 persons, and we had difficulty in finding room for the ordinary congregation… For some of us, the most memorable picture in our minds will be that of men in battledress kneeling in the quiet Church, lit only by the floodlight shining through the stained glass windows, to give thanks for their safe homecoming. May God bless them all, and comfort the sore hearts of those whose dear ones will not return.

A brief period of rejoicing