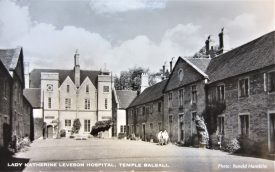 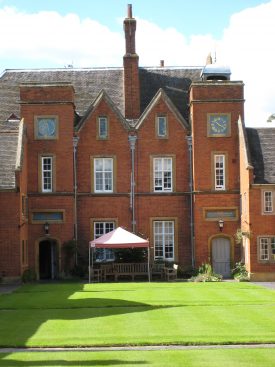 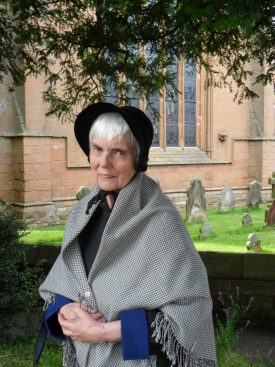 The almshouse at Temple Balsall was founded by Lady Katherine Leveson who added a codicil to her will in 1671 leaving the manor of Balsall to Trustees for the erection of a Hospital for twenty widows or poor spinsters from Balsall, or failing that, from Itchington in Warwickshire or Trentham in Staffordshire or Lilleshall in Shropshire. She also provided for the free teaching of twenty Balsall boys by the Hospital chaplain: the school thus founded still survives today next door to the almshouse.1

Katherine Dudley was granddaughter of the famous Robert Dudley, Earl of Leicester, to whom Balsall belonged. She married Sir Richard Leveson whose family seat was Trentham Hall in Staffordshire. They had no children; she died in 1674 and there’s an effigy of her and her husband in Lilleshall parish church in Shropshire.

The first hospital buildings comprised an oblong courtyard that was built – mainly in brick – by William Hurlbut, a builder from Warwick, between 1676-85. Some of his bills survive from 1685 for his work at the hospital.2 (He also built the market hall, now a museum, and the former Shire Hall – both in Warwick.) The complex included a large barn and stables as well as the Master’s House with an inscription and clock. The hospital was virtually rebuilt by Francis Smith of Warwick in 1725-7, and side wings added in 1772-4 to provide more accommodation – Francis designed many other buildings including the 18th-century wing of Stoneleigh Abbey. The original Master’s House was rebuilt in the Tudor style by Charles Smith of Leamington, who also built the Leamington Pump Rooms. More recently the Governors have reconstructed the flats in order to bring them up to modern standards.

The residents are called ‘Dames’ and were originally required to wear a uniform consisting of a shawl, a bonnet and a grey gown with Lady Katherine’s initials K.L. displayed on the front. The number of residents was increased in the 18th century to 30. By 1842 the dress was a blue gown and the dames received a new bonnet and red shawl every three years.3 This dress was only abandoned in the 20th century, but is still worn on special occasions (as you can see). Residents received a small pension and bread (though some complained it was too coarse) plus coals and – at one stage – milk from a cow kept for the purpose.

Originally, two of the younger residents were paid extra to help care for older ones, but from 1777 a matron was employed to attend daily, and two nurses appointed to care for the residents. The nurses sometimes caused problems: one was disciplined for swearing and another for drunkenness. In 1776 an apothecary was paid five guineas a year to provide treatment for residents.4 There’s a moving cemetery nearby with rows of little crosses marking the graves of residents. When I visited on a Sunday, some of the residents were serving tea in the Templar’s Hall nearby

Warwickshire County Record Office cares for a  collection of records relating to this Hospital.5 The late Eileen Gooder studied these records in detail and produced a book that provides a valuable account of life in the Hospital. The Bailiffs’ accounts tell us about daily activities: in 1768 the Governors’ dinner cost £3, the dames’ gowns £34 10s and the Hospital clock was cleaned for 5s.6 Unusually, a woman was appointed bailiff in 1765: Mrs Ann Evetts, widow of the previous bailiff, Thomas Evetts. When she died, her son was too young to succeed her; he was offered the post later on (though in fact declined it).

1 This article is based on exhibitions designed by staff of Warwickshire County Record Office during the 20th century with supplementary material from this book: Gooder, E. ‘Temple Balsall from Hospitallers to a Caring Community 1322 to Modern Times’, Philimore, 1999.