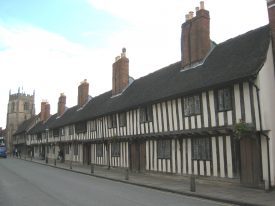 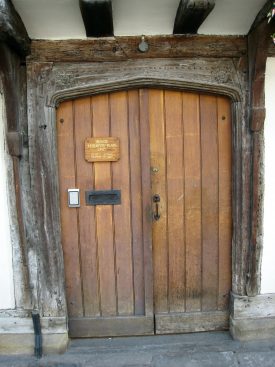 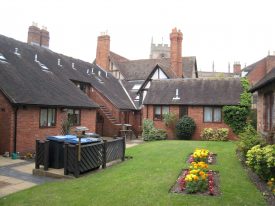 Origin of the almshouse

Ten almshouses were built in 1417-18 by the Guild of the Holy Cross (amazingly, accounts survive of payments for the costs of the building including 26s 8d for timber & carpenter and 7 cartloads of stone at 3d a load). The almshouses were originally for old or needy members of the guild. The reformation led to the suppression of many almshouses but the Church St Almshouses managed to survive. In 1553 they were transferred to Stratford upon Avon Corporation and enlarged in order to provide homes for 24 elderly townsfolk.

The building is Grade I listed and provides a magnificent prospect beside the grammar school attended by William Shakespeare (see photo). It has of course been renovated over the years. Accounts survive from the 15th century onwards of payments for maintenance of the almshouses (which were clearly thatched originally): mending the pump or glazing windows etc.

Rules survive from the 17th century: the almspeople had to attend the chapel on weekdays and go to church on Sundays (unless they were ill). Misbehaviour such as drunkenness, quarrelling or swearing could lead to the withdrawal of their pension. The original income had been 4d a week (by 1813 it was 3s 6d and this was raised to 5s by the 1830s).

In the 19th century

By the early 19th century there were 22 dwellings housing 24 almspeople – 12 men and 12 women – the latter mostly widows. Downstairs there was 1 room and a closet; the upstairs was accessible via a gallery. Stoves were provided, but residents brought their own furniture. Applicants had to be resident in the borough of Stratford and the oldest were preferred; they were elected by ballot at a corporate meeting.

Censuses tell us about the people living there. The oldest I found was 96-year old Ephraim Pulley, a retired basket-maker who was still renting an allotment in the town (though I suspect his family helped with the digging)! Most of the residents were widowed, but not all of them; there were some married couples and a few single individuals. Children and even grandchildren were living in some of the almshouses. Some of the older residents had a housekeeper or nurse living with them and there was a resident matron by 1881. Occupations varied from schoolteachers to labourers; they included a former inn-keeper, a yeoman, a hostler, a hawker, a sawyer and a nailmaker.

The building was refurbished in the mid 1980s and nowadays provides 11 units each with its own kitchen & bathroom. There is a communal lounge and garden at the rear (see photo) and a resident warden.

The Shakespeare Centre Library and Archive holds a wealth of material on the history of the almshouse (with a helpful translation of the Latin entries on their web-site) a book about these almshouses would be most welcome. The Charity Commissioners’ reports from the 1830s (available at the Warwickshire County Record Office) and 19th-century censuses were also consulted.