You are here: Home>Locations>Warwickshire unspecified or out of county>Rockin' and Rollin', 60 years of Warwickshire Association Youth Clubs: Part Two 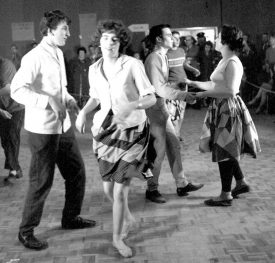 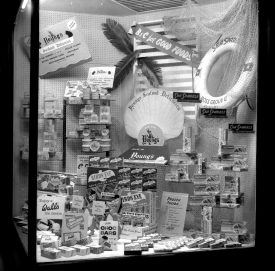 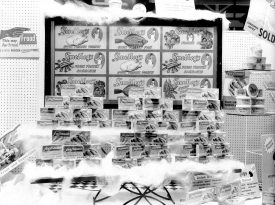 Rock around the clock

Before the birth of Rock ‘n’ Roll and its arrival in Britain, the most popular form of music amongst young people was Skiffle. Influenced by blues, jazz and folk music, this was a basic and fun form of music that utilised cheap and often home-made instruments (washboards and tea-chest bass). It was a more accessible form of music-making for young people in an impoverished, post-war country, as anyone could get together and make this type of music.

Skiffle grew in popularity throughout the 50s, and was the origin of many musicians who would later become very famous – including John Lennon, Mick Jagger and Jimmy Page! It has been estimated that in the late 1950s, there were 30,000–50,000 skiffle groups in Britain.

Films such as Blackboard Jungle (1955) and Rock Around the Clock (1955) were among the first to bring American Rock ‘n’ Roll to a British audience. Initially, the British music industry produced copies of American records, recorded with session musicians and often fronted by teen idols. Later, in 1958, Britain produced its first authentic Rock ‘n’ Roll star, when Cliff Richard reached number 2 in the charts with ‘Move It’. The first popular music TV shows such as Six-Five Special and Oh Boy! promoted the new British Rock and Roll bands.

Incredibly, it wasn’t until 1959 before American Rock ‘n’ Roll really came to Britain, with the arrival of Gene Vincent in December of that year, followed by Eddie Cochran. Musicians’ Union rules protected and prioritised British musicians, and even when many American stars did tour, they had to do so with British backing bands.

Back home for tea

In Britain in the early 1950s, you’d have been far more likely to find olive oil in a pharmacy than you would have done on a supermarket shelf. Even spaghetti was regarded as a new and revolutionary dish! There wasn’t much variety in the shops, and food rationing did not completely finish until 1954. So what did teenagers and their families eat, and where could you hang out and meet friends?

The 1950s saw some big changes to what and how people ate with the advent of labour-saving devices and the increasing use of frozen and pre-prepared food. Fitted kitchens and modern appliances became more common in the home as technology became cheaper.

The amount of choice in the 1950s was much less than today. Fresh fruit and vegetables were bought mainly from British growers, so most people only ate what was in season. Despite rationing, diets still contained more bread, vegetables and milk than children have today. Virtually all food was sold from small specialist shops and many people had bread, milk, vegetables and groceries delivered. But shopping was transformed as bigger food retailers began to open self-service shops, an idea copied from the United States.

It’s all so convenient

The influential books of Elizabeth David, who had spent the war years in France, Greece and Egypt, were written to bring Mediterranean cuisine to Britain. She introduced pasta and other new dishes to the national menu. For many people though, such continental variety remained unconventional and most diets remained quite limited. The biggest changes were coming as the decade came to end, with the arrival of frozen and ‘convenience’ foods. Britain took to frozen foods more quickly than other European countries. Rationing meant that vegetables (which were not rationed) were one of the first foods to be available, with frozen peas in particular becoming popular. In 1955, Birds Eye launched the famous fish finger at a price of 1s 8d. By 1961, Birds Eye had 60 product lines.