You are here: Home>Locations>Astley>History of Astley School 1890s-1920s 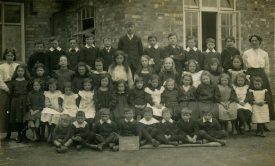 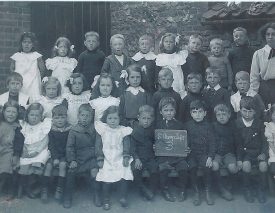 Astley remained a traditional village school with a rural atmosphere. The largest single number came from Astley village. Others came from surrounding farms (making long journeys) or from the Arbury estate. Boys and girls would occasionally be invited to Arbury Hall for a treat – an orange, a bun and a present. This was continued until at least the 1920s. Everyday administration was still delegated to the Newdegate land agents.

From the 1890s, as coal-mining developed in nearby villages, children were admitted to the school from further afield, the Smorrall Lane area of Bedworth, Robinson’s End on the edge of Stockingford, and Arley. The population of the parish also started to grow slightly after 1880. So, school numbers grew and by 1893 there were 73 pupils, but this is the highest recorded number and did not last.

From the autumn of 1887 to January 1918 Mary Haynes Shirley ran the school and oversaw a transformation in standards with stricter discipline and improved facilities. However, school was not all desk-bound study; in June 1908, 65 day and Sunday school children were taken to Stonebridge, part of the Packington estate near Meriden, returning to take tea and play games on the lawn at Maxstoke Hall Farm.

The large schoolroom had been divided into two unequal parts. There tended to be two main teachers, one for younger children, five to seven-year olds, and one for eight to ten or eleven years. Astley had some pupil-teachers; these were promising pupils who could assist the Head and might go into teaching as a career when older, with further training.

A change in control

After 1902 a rural school like Astley, though not formally changing its status, was now partly controlled by the local County Council. Money from the rates would finance its day to day running, and teachers’ salaries. However, the capital sums required for substantial changes to the buildings still needed to come from the church, or in Astley’s case the Newdegates, even if normal wear and tear expenses would be met by the local authority.

Few pupils still remained after the ages of ten or eleven, and certainly not full-time. There was still pressure for children in rural areas to help with agricultural work at demanding times of the year. Older boys assisted with ‘beating’ – assisting shooting parties – and boys and girls of various ages were requisitioned for potato picking. Whilst casual absenteeism had declined, children frequently missed classes through illness.

By 1914 the development of the motor car and the telephone meant Astley village children were less cut off than their parents’ generation. Still, some of the rural customs persisted and the rhythms of the rural year were still significant. Maypole Day remained a special occasion: Mrs Mills would trim a hoop with wild flowers gathered by the children and this was nailed on to a broomstick and taken with dancing and singing round the village and nearby fields, participants being fed and watered at farms en route.