You are here: Home>Locations>Wilmcote>The Wilmcote Plesiosaur 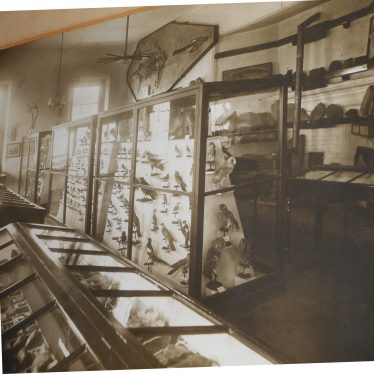 Wilmcote Plesiosaur on the First Floor of the Museum; c. 1900?
Image courtesy of Warwickshire Museum 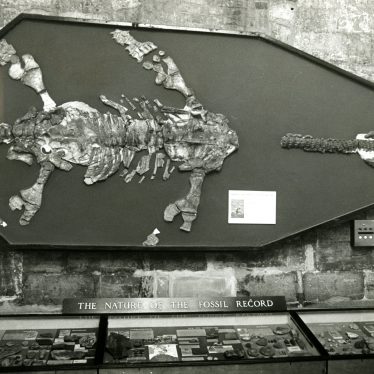 Wilmcote Plesiosaur on the ground floor of Market Hall Museum in 1974, shortly before a major refurbishment.
Image courtesy of Warwickshire Museum 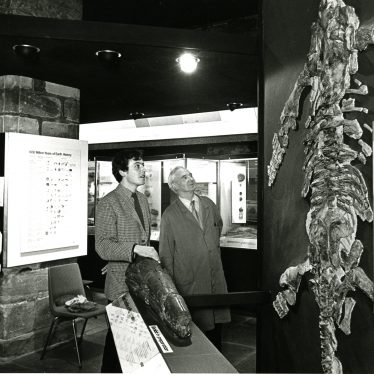 The Wilmcote Plesiosaur in its final position on the ground floor in Market Hall Museum, mid-1970s refurbishment.
Image courtesy of Warwickshire Museum

During the 19th century, the Jurassic limestone layers of southern and eastern Warwickshire were quarried for flooring, gravestones and walling, and for making lime and cement. Workmen often uncovered amazing fossils from the remarkably fine-grained rock beds.

Wilmcote Quarry near Stratford-upon-Avon was the source of a fossil plesiosaur skeleton, which you can see here as a replica of the original. Richard Greaves, the quarry owner, donated the skeleton to the Warwickshire Natural History and Archaeological Society in 1841. The Warwickshire Museum has cared for it ever since.

The scientific name for this impressive animal is Atychodracon. This is derived from the Greek words for ‘unfortunate’ and ‘dragon’.

The Wilmcote Plesiosaur has been on a journey around the museum, since it was acquired in 1841. A photograph dating back to around the 1900s suggests that it was originally displayed on the first floor of the building. During the post-war period it was displayed horizontally on a nearby ground floor wall, before being mounted vertically on a ground floor pillar in the mid-1970s. Today, the real fossil skeleton is safely in storage, allowing us to study it closely.

A full-size replica for display was constructed in 2016.