You are here: Home>Locations>Stratford-upon-Avon>The War In Stratford, and the Mop

The War In Stratford, and the Mop 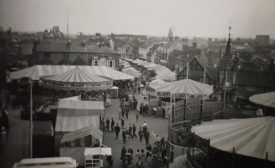 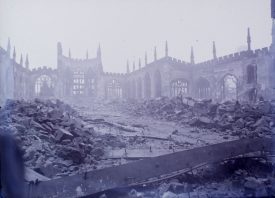 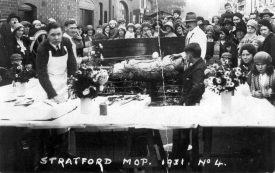 In 1939 when the war was announced, I was 18 years old. I was stood on the side of the road next to the cinema waiting for my mum to bring me my rain coat as it was pouring with rain. I was stood on the Alcester road with the rest of my siblings, my mum and my brother’s friends, we were waiting to cross the road. I was about to cross the road but my brother pulled me back as a car came past. My mum however was knocked over by the car as she was slightly deaf and didn’t hear us call her. I ran up the hill to my house, on the top of Alcester Road to get my sisters. Then we went back to the hospital to pick up my mum. We were told that she could not stay there as they needed the space in the hospital for the troops. That was when I found out the war had started.

During the war on the 12th October was the Stratford Mop. The whole of the mop was in the town centre of Stratford, because there couldn’t be any light seen from above, all the mop was covered with sheets above to block out the light. This didn’t work as I remember the planes coming over ahead so the whole of the mop had to be moved down to the moat house. Another year, during the mop I remember seeing the meat houses decorating the pigs in red, white and blue ribbon and brought them down the streets in order to be taken to the places where they were needed to be roasted. The men all wore white aprons, and I remember seeing men with the big wheels turning the pig over the fire, roasting it slowly in the street.

Another memory of mine during the war was when Birmingham and Coventry was bombed. From where I lived on the top of Alcester Road I would see the whole sky was lit up. The whole sky was a bright red colour, there wasn’t a bit of black there. I could see all the sparks in the sky from the fires and I saw the planes flying overhead. When I found out Coventry was bombed my friend and I pushed biked to Coventry. We had to stop at Kenilworth though on the way. We went there to see what the bombs had done to the city but they didn’t let us in to see anything.

When the sirens went off, at the start of the war, I went home. But towards the end of the war we didn’t go into the air raid shelters, instead I remember one time going dancing at the town hall. We didn’t let the war stop us and continued as normal. One time I was in the cinema when the siren went off, and a message came up on the screen letting us know we could leave to go to a shelter if we wanted. My friend and I didn’t leave and continued to watch the film whilst there was an air raid siren.

I remember the river in front of the theatre was frozen during the winter of the Second World War. There were swans walking on the ice and many families came out to ice skate on the frozen ice next to the theatre.