You are here: Home>Locations>Coventry>A Run to the Cup Final for Coventry City

A Run to the Cup Final for Coventry City 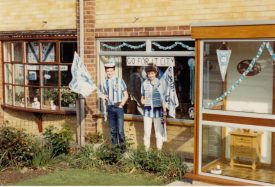 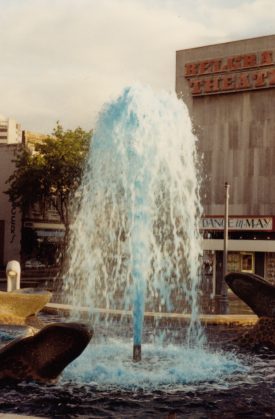 The fountain outside the Belgrade Theatre turns Sky Blue, May 15th 1987.
Image courtesy of Caroline Sampson

Every year when May comes around, I always get a little shiver of excited nostalgia. This year marks the 32nd year since Coventry City won the FA Cup in what I remain absolutely convinced was the best cup final ever.

I was away at the University of Leeds when this particular cup run started. My finals began on the Monday after the cup final and I well remember the feeling of being unable to concentrate fully on revision for weeks beforehand! For me, the excitement started to build properly from the fifth round when we played Stoke away. There was a palpable sense of being on a real, proper cup run that just kept building and building. I managed to get to Stoke, Sheffield Wednesday, Leeds and the Cup Final itself.

Football for me has always been a family thing. I started going to City from 1977 when I was 12. My younger brother Chris had asked my Dad to take him up Highfield Road and the first match they went to was the 1-0 victory against Liverpool. They both came home as high as kites and I remember feeling utterly left out so from that time on, I went too. We’d sometimes go with my Uncle Graham as well; the whole family were City fans. The closer we got to Wembley, the more certain we were that there was a hard core of eight Sampsons that absolutely needed to go – me, Dad (George), Chris, Uncle Graham and my cousin Andrew were certs, and Mum (Wendy), Aunty Sandra and cousin Mark completed the group.

My clearest memories of the cup run itself were the constant battles to get tickets. Chris and I were both away at University so we weren’t season ticket holders. That meant getting ticket stubs was a recurrent topic of conversation. I remember all the logistics of getting back from Leeds where I was living to join up with the rest of the clan to travel to the away fixtures. I remember doing the Mexican wave at every match we went to and the near hysteria as the excitement and the feelings of hope grew. I remember walking with my friend Caz from Coventry down to the University in Leeds one day and hearing a car horn toot – we both turned simultaneously, clapped our hands above our heads and yelled “City”. We didn’t even think about it – if you heard a car toot, that’s just what you did! It was clearly about City’s cup run – what else!?

Getting to Hillsbrough for the semi was bonkers. Lines and lines of cars leaving Cov on the Ansty Road, massive queues to get to the ground. Kick off was postponed I remember, and we made it into the ground just after they’d started. On the way home, the Ansty Road was packed again, people lining the road, everyone yelling and tooting their horns. Scarves out of everyone’s car window, pedestrians passing pints through car windows to complete strangers. We heard afterwards that the Mount Pleasant pub ran out of pint pots! Bonkers and absolutely, unforgettably magical!

Uncle Graham had got into a routine of saying “I’ve got a bad feeling about this” at every fixture which just escalated the tension and excitement even more. A bit like pundit Jimmy Greaves who kept predicting we’d go out in the next round, but we never did. He knew it by the end though – remember the big wink he did to the camera when he confidently predicted we’d lose in the final! He knew he had to keep up the tradition!

But we still had to get tickets…