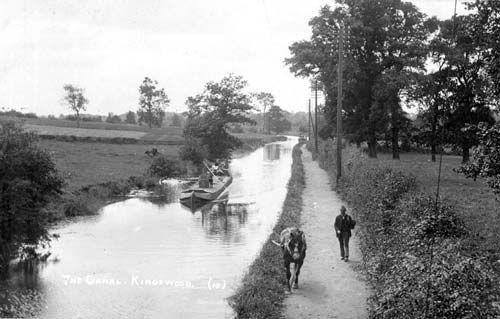 The Grand Union Canal, a waterway used for transporting goods. It dates to the Imperial period, when it was the Warwick and Napton Canal, and part of the link between Birmingham and London.

1 The W and N C was authorised in 1794 and was built and opened simultaneously with the Warwick and Birmingham Canal in 1800. It was therefore an essential link in the route from Birmingham to London which was completed by 1805. Initially prosperous, it was badly hit first by the opening of the Fazeby – Coventry Canal to Oxford Canal route to London, and later by the railways. By 1845 Warwick Canal was in the hands of the receiver, but struggled on. By 1929 the canal was absorbed into the Grand Union Canal Company who invested in new locks, bridges and warehousing in the hope of rejuvenating the canal. It was the GUCCo who gave the canal its characteristic wide concrete locks, often leaving the old narrow locks alongside as overflow channels. There is a good deal of evidence of the type of trade the canal indulged in along the banks. Most notable are the wharves at Emscote (WA 2154) and the spurs and wharves serving the cement and lime works near Stockton. The canal has 25 locks from Warwick to Napton serving to first lower and then raise the level into and out of the Avon Valley. There are 34 numbered bridges and three aqueducts. The canal is 14.5 miles long.