You are here: Home>Locations>Chesterton>Site of Roman Villa N of Ewefield Farm 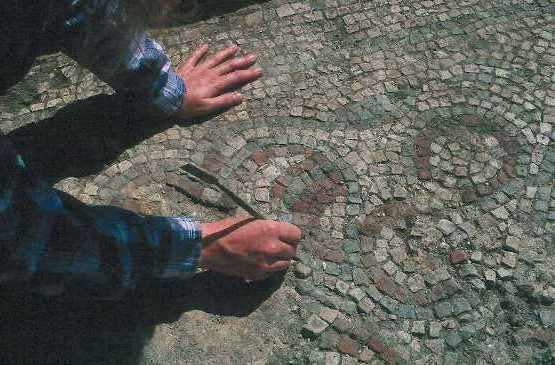 The site of a villa dating to the Roman period. Excavations have taken place at the site and have produced finds such as imbrexes, querns, a coin and mosaics. It is located 600m west of the church, Chesterton.

1 In 1922 a quantity of potsherds were reported during the laying of a water-pipe on the N side of Ewe Fields Farm. Several short trenches were dug, gradually working back up the hill, and at a depth of about 0.7m a large number of tesserae 1 cm square were found. The excavation was extended in all directions for several yards, but no pavement was found in position. Often three or four cubes were found together, and one fragment with fourteen, which showed two curved lines coming together, was found. There were three kinds of tesserae – white and grey local limestone and red tile. No foundations of walls, but on either side at a distance of about 3.9m the small tesserae gave place to larger ones. A large number of pieces of coarse pottery were also found.
2 Fragments of a coarse hand-made pot from Chesterton.
3 Photo of cooking pot.
4 The site is under permanent grass and there are no surface indications. There have been no recent finds.
5 In the course of site excavations of a new house fronting Church Lane and adjacent to Ewe Fields Farm, a quantity of Romano British material was found in 1980. The tile fragments include tegulae and imbrices and a piece of combed flue tile; also two large tesserae cut from tiles. The pottery included red colour coated Oxfordshire bowls but mainly consisted of light grey kitchen wares. Three coins were reported to the County Museum (Claudius II, Tetricus I, Constantius II). It is evident that this material derives from the nearby villa.
6 Note.
7 Iron Age coin -‘Dobunni’ billon unit – found in July 1994 during an excavation by WART. The coin was found under a Roman wall.
8 Excavations in advance of the excavation of a slurry pit on the site of a known Roman villa exposed a north-south range c12m wide. Along its eastern side was a corridor 2.8m wide floored with a three-colour mosaic, provisionally dated to 4th century. A central lozenge containing a foliage pattern was surrounded by triangular panels with foliage and fruit; to the south was a rectangular panel with five pelta/leaf shapes, and south again was a fragment of another panel, mostly destroyed. The mosaic was cut by two later hearths, and the eastern wall of the corridor had been expanded over it. The room to the west was 6.3m across, no floor levels survived. The mosaic has been protected and reburied.
9 Excavation photograph 1995.
10 A programme of geophysical survey has been carried out in the parish of Chesterton and Kingston, about 4 miles from Leamington Spa. In 1991 survey was carried out within the known Roman town enclosure and in 1992-3 a further survey in surrounding fields revealed Roman activity over a larger area than previously known.
11 In 1990 two small trenches revealed rubble spreads and Roman pottery.
12 Location plan for ref 11.
13 The full information for the above excavation is not available so the precise nature of features and finds is unknown.
14 The gradual disclosure of a Roman Villa of corridor type, terraced, with associated partly destroyed mosaic pavements. These pavements were cut by later hearths, pits and a kiln. Finds included an early Roman coin, painted wall plaster, pottery, broken querns, roof and hypocaust tiles, various functional, recreational and decorative objects made of bone, jet, copper, iron and glass.
15 Excavation within the Ewefields Farm Dutch barn in 2000 uncovered the remains of a probable extension of the villa buildings, and a sequence of rebuilding to a hypocaust above a stone drain, floored with teracotta tiles, and full of silt.
16 Scheduled as an Ancient Monument 7th June 2001. The monument includes the buried and earthwork remains of the Roman villa and medieval settlement.
17 Scheduled area and Schedule updated 27th November, 2003.
18 Description of mosaics at the Roman villa.
19 Information about the mosaics from ‘Roman Mosaics of Britain’ vol 1.