You are here: Home>Locations>Chesterton>Chesterton Windmill 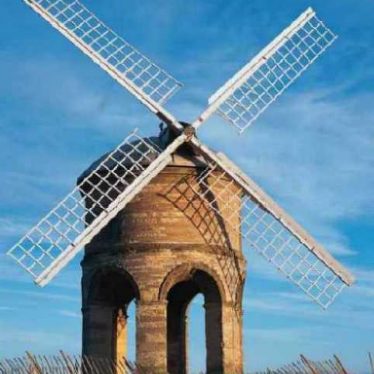 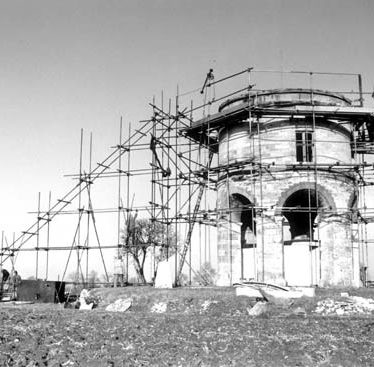 A 17th century circular stone windmill of unique design, one of the structures forming part of a designed landscape associated with the Peyto mansion at Chesterton. It has been restored, and much of the original machinery is still in place. It stands on Windmill Hill.

1 Handsome stone windmill erected in 1632 on site of earlier mill for Sir Edward Peyto, after a design by Inigo Jones. The roof is of domical shape covered with lead, and is made to revolve for the the purpose of adapting the position of the fliers to the direction of the wind.
2 Ancient Monument description.
3 Circular windmill. There is no staircase and access to the upper floor must have been by ladder. This may have been built as an observatory, a gazebo or ‘standing’ rather than a windmill.
4 Recently restored but has no sails.
5 Much of the machinery is still in place and is in an excellent state of preservation. Building may originally have been an observatory. Said to have been designed by Inigo Jones. It is in his style and of his period although there is no documentary evidence to support the suggestion. The lower storey is pierced with six arched openings. On the first floor are two pairs of stones, and above the second floor are the windshaft and principal gearing. Further details of building structure given.
6 Sir Edward Peto was very interested in mathematics and may have designed the mill himself.
7 A document in the Shakespeare Birthplace Trust describes the building as a windmill in 1647. The machinery was extensively modified about 1860 and the mill was last used in 1910. The style is unique. The building was restored and reopened in 1971.
8 Of exceptional interest to the architect and engineer. Probably originally built as a windmill. Detailed discussion of who built the mill and its history.
9 Notes.
10 Scheduled Monument description.
11 Listed Building description.
12 A volume of accounts for 1633-4 in the Shakespeare Birthplace Trust Record Office shows that construction continued in the summer of 1633, and gives details of payments to craftsmen and labourers. The document makes it clear that the original purpose of the building was as a windmill, not a folly or park building, and the absence of references to payments to an architect is consistent with the possibility that Sir Edward Peyto designed the building himself.
13 One of a number of structures associated with a 17th century landscape surrounding Chesterton House.
14 Correspondence from the 1960s.
15 Letter from the DoE about scheduled monument consent for replacement of four sails.
16 Location map.
17 Programme for an event marking the restoration in 1971.
18 WCC leaflet.
19 Sails replaced in 2007 following failure of one in 2006.
20 Letter with a few details on the windmill.
21 Letter concerning the opening of Chesterton windmill om 2007.