Site of Migration Cemetery at Emscote 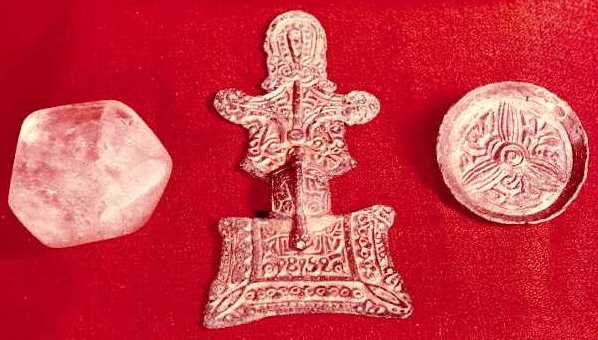 Anglo Saxon brooches and a crystal bead found at a cemetery site at Emscote, Warwick
Warwickshire County Council
Description of this historic site

The site of an Anglo Saxon cemetery dating to the Migration period. The cemetery was discovered by work men in 1852 and again in 1921. The Myton Brooch (now in Warwick Museum) came from here. The site lies between Mercia Way and the River Avon, Warwick.

1 In Warwick Museum is a remarkable brooch found near the railway at Emscote Road. It is sometimes called the Myton brooch. It was discovered about 1852 by a labourer while digging a gravel pit. It is supposed that there were several burials in the same locality, but no exact details are available. It is known that the brooch was associated with a skull, a large crystal bead and part of a silver ring.
2 1921: While excavating for gravel on the right bank of the River Avon at Emscote the workmen disturbed several Saxon interments. At that time five or six graves had been found and a further one was discovered later. Among the finds were spear-heads, brooches and shield-bosses. The skeletons were in a poor state of preservation. With one skeleton a necklet or torque was found. It was made of silver, and is a ring of about 11 cm in diameter, round in section and varying in thickness from 0.4 cm to 0.2 cm. It was fastened around the neck of the wearer by a hook and eye. According to the labourers two gilt-bronze saucer brooches were found with the necklet. From other burials came a pair of ‘long’ brooches and a pair of flat disc brooches. A Roman brooch was also found.
3 Descriptive text.
4 Myton brooch found at SP2965. Anglo Saxon cemetery at SP2965. Information for both from P B Chatwin, 27:01:1949.
5 Finds in Warwick Museum included the Myton brooch, a large facetted quartz bead and a saucer brooch.
6 It is not known if any other graves were destroyed. Finds are in Warwick Museum, the British Museum and the Stratford Museum.