You are here: Home>Locations>Merevale>Merevale Abbey Frater 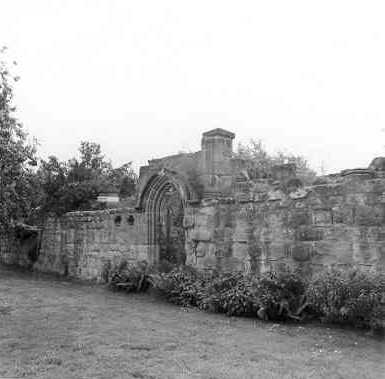 Remains of a building thought to be the refectory of Merevale Abbey, a dining hall where the monks would have eaten their meals. It is Medieval in origin and is located on the south side of Abbey Farm.

1 S of the church was the refectory or dining hall, a rather noble room, constructed in the 14th century. It was entered near the W end through the N wall. In the S wall of the refectory was the pulpit, a portion of which still remains.
2 Plan of 1904.
3 The side walls of the Frater are still standing to some height. It marks the S side of the cloisters. The remains, about 32m by 10m, stand in a garden E of the farmhouse and consist of the E half of the N and S walls standing about 4m high. They include the S stair to the pulpitum, also a scrap of the W end of the N wall containing the entrance from the cloister and W of this the entrance to the former kitchen, all dating from the mid 13th century.
4 SAM List.
5 Photograph.
6 In most Cistercian houses it was traditional for the refectory to be built on a north-south alignment, but this example is untypically aligned east-west. The north wall survives up to 6m high in places and the eastern half both its internal and external faces are divided into bays by round filleted shafts and semi-octagonal pilasters. The western end of the wall includes an original doorway. An 18m length of the south wall also remains and retains the entrance and stairs to a pulpit within its fabric. The lower courses of the E wall, with a doorway, are visible above ground, whilst the W one remains only as a buried feature.