You are here: Home>Locations>Maxstoke>Maxstoke Priory Infirmary 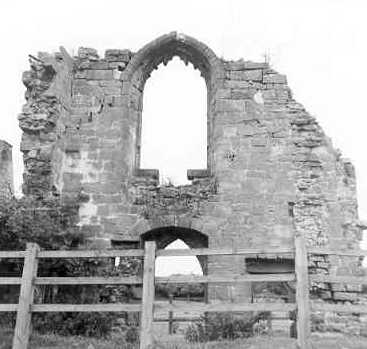 The remains of Maxtoke Priory Infirmary which was built during the Medieval period. It was situated 150m east of the church at Maxtoke.

1 NE of Church is the W wall of the infirmary hall or chapel. It had a nave with N and S arcades and aisles. The wall has a doorway with chamfered jambs and two-centred head. Next N is a smaller doorway, also opening into the nave space. It has a peculiar arch of three straight sides, and opened from a corridor from the cloisters. The W window above was of three lights and tracery (now missing); the arch is intact, but no walling survives above it. Inside the wall is the semi-octagonal respond of the former south arcade; only a base stone of the N respond is left.
5 At E end were tiled altar steps; it was probably being used as a chapel.
6 Photographs.
7 The walls stand to a height of about 8.5m and are 13m long. The masonry of the wall is 1m thick and the remains mark the position of the north and south arcades of the building. Most features appear to be similar in form to features in the church and the gatehouses.
8 Architectural Report by RCHME.