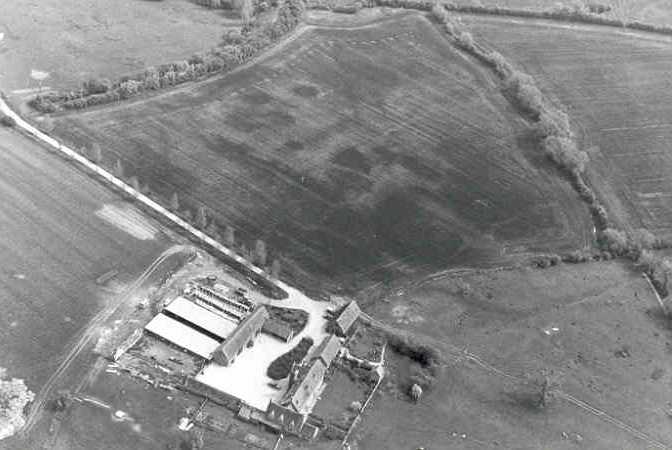 The site of an area of Medieval shrunken village at Longdon. It is known from documentary evidence, earthworks of house platforms and trackways revealed on aerial photographs, and from finds of pottery. It is located 600m north west of Longdon Poplars.

1 A Medieval deserted settlement was surveyed after having been ploughed for the second time. A measured but tentative plan was produced. Pottery, much of it 12th and 13th century, was restricted to the N part of the site. The date of enclosure is uncertain, but an early 17th century house stands beside the village and desertion by enclosure seems probable. The hollowed-out village street is visible, with the house platforms beside it.
2 Plan of above survey.
3 The village site extends over parts of two fields to the S of Longdon Manor. The earthworks consist of an E-W street and two trackways, with house platforms and tofts on the W part of the site.
4 AP.
5 Earthworks of ditches and banks show on air photographs.
6 Longdon is mentioned individually in the Domesday survey, at the time being sub-let to Gilbert son of Turold. Longdon as a village cannot be identified until the medieval period, and in common with many of the settlements of this area had been abandoned by Post Medieval times. There are no records of when desertion occurred. This was a four and a half ‘mansae’ estate when leased to Byrnric in AD 969 and in 1086 the listed inhabitants included 8 villeins, 2 bordars, 4 slaves and 4 bondwomen. 8 ploughs were operating on the manor. 8 tax-payers are still listed in the returns of 1327 and this village may have been a victim of deliberate enclosure for grazing, a fate shared with numerous other settlements in this part of Warwickshire. The village street was entirely abandoned and in 16th century a farmhouse was built above the village site.
7 Plan showing 10th century boundary clause.
8 Plotted on Tredington Parish Ridge & Furrow Plot (PRN 6455).
9 AP.
10 The survey from 1977.
11 Notes on field margins.