You are here: Home>Locations>Honington>Honington Hall 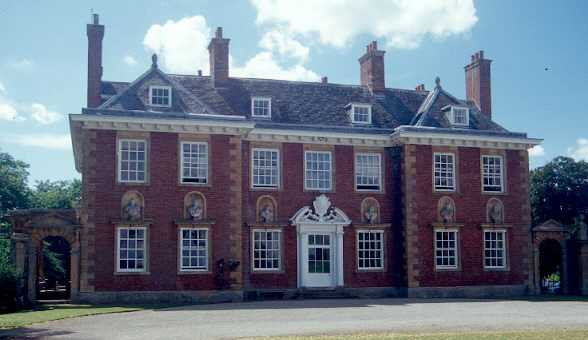 1 Dugdale states that the original Honington estates existed in the days of Edward the Confessor, and the manor was one of those with which Earl Leofric had endowed his religious house at Coventry.
2 In 1737 the estate passed to the Townsend family, who made considerable alterations. These included the erection of a great octagonal salon and loggia: the basement of the last was retained but its colonnade was rebuilt in front of a garden house to the NW of the Hall. The main block was of simple plan, having a centre hall between side-wings which project slightly on the E front and contain the other two most important original rooms of the ground floor, the Drawing Room in the S wing and the Dining Room. The entrance to the grounds, on the N side of the village green, is of 1685.
3 The present house was built for a London merchant, Sir Henry Parker in 1668. The 18th century brickpiers have vermiculated stone dressings, moulded stone plinths and moulded stone cornices. They have entabletures with ball heads and in the friezes is applied ornament – carvings of heads between swags of drapery. The main gateway is flanked by small pedestrian gateways, the piers having stone capitals with ball heads.
4 The walls of the hall are of red brick with rusticated stone angle dressings and stone framed sash windows- the lower windos with bracketed drip stones. To the east it has a recessed 3 bay centre and slightly projecting 2 bay wings, 2 storeys and attics. The roofs are hipped and covered with slates. There are square headed dormers in the roof. The chimney stacks of brick are plain except the 18th century pair on the south wall which are paralleled.
The broad doorway in the middle of the east front has side pilasters and a curved broken pediment with a coat of arms.
In the east and soutn fronts, above the ground floor windows, are oval recesses containing a series of busts of Roman emperors.
The Townsend family aquired Honington Hall sometime before 1731. A print by Buck dated 1730 refers to Honington as the seat of Joseph Townsend, and it is the Townsend arms which are found on the open segmental pediment above the front door. The new owner made considerable alterations and embelishments- including, in all probability, the busts of the emperors.
To the left and right of the Hall are small arched and pedimented gateways into the garden. Beyond the one on the right is a brick quadrant wallwith pilasters, blank niches and a truglyph frieze. the opposite number on the left has disappeared.
A richly carved door-way with an apsed hood gives access to the courtyard to the north of the house where there are two octagonal pigeoncote (WA 2141) and the rear of the early 17th century stables (WA 2142). To the north of the stables is a square building of the 16th/ early 17th century of red brick with stone dressings and a gable to each face. This is a granary known as The Bothy. The foundations of this building (Listing Grade II: No 12_144C) rest on stone staddle piers bricked in between.
Another brick building of similar date is to be found 30 yards north of the Bothy. This is a regular 2 storey structure with stone angle dressings and 4 windows with moulded stone architraves and an old tiled roof with two moulded wood dormers. (Listing Grade II: No 12_144D).
In 1885 a victorian wing was added to the house and restoration work was carried out during the 1970s.
The west elevation shows an octagon constructed between the short projections on the west side of the house. The terrace was built during the 19th century, but the temple alongside has been in its position since the 1760s.
5 It was built for Sir Henry Parker – the Parkers were London merchants – in 1682. The date is on the rainwater head, and the E (entrance) side represents that date to perfection. The house is of brick with brown stone dressings. It has to the E a recessed three-bay centre and slightly projecting two-bay wings. Two storeys and a hipped roof.
6 Situated on rising ground above the Stour, adjacent to the church, with the main front facing E. On the N side of the front is a brick-built screen, there being two arched gateways, one on either end of the front, to allow access behind the screen. A notable feature of the house is the busts of Roman Emperors on the S and E faces.
7 Photo.