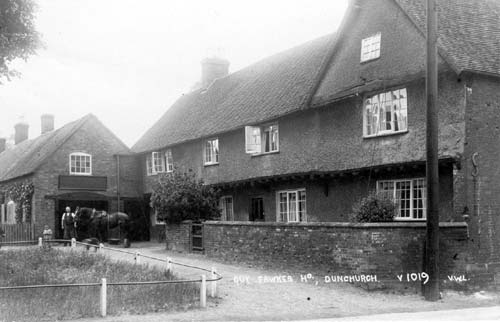 Guy Fawkes House, formerly an inn dating to the Medieval and Post Medieval periods. The Warwickshire conspirators are said to have waited here to hear the results of the Gunpowder Plot in 1605. The house is situated on Daventry Road, Dunchurch.

1 2 houses, formerly the Lion Inn. 16th century, and 20th century alterations and additions. Timber framed with plaster infilling, an old tile roof and large chimney with four diagonal shafts. The west front has an overhanging upper floor, gable to the right hand side with one bay. Forge Cottage on left has late 20th century glazed door and flanking window. Plank door to passage to rear. Guy Fawkes House on right has plank door. The Warwickshire conspirators are said to have waited in the Lion Inn to hear the results of the Gunpowder Plot.
2 This house has historical associations with Guy Fawkes. On 5th November 1605 the Gunpowder Plotters met here before learning of Fawkes’ arrest.