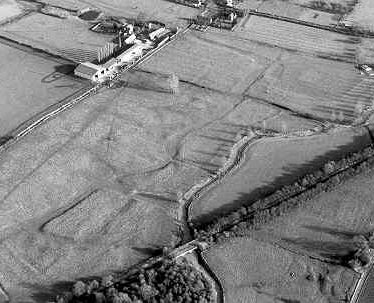 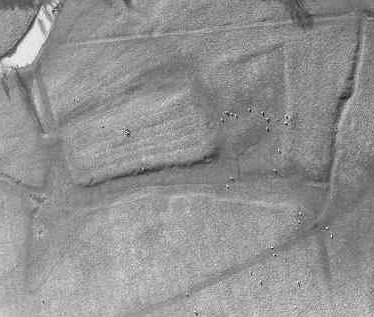 The site of a Medieval deserted settlement. Hollow ways and house platforms survive as earthworks. Fragments of Medieval pottery and roof tiles have been found at the site which lies to the west of Long Itchington.

1 From Whitehall Farm, a hollow way runs due S through the field called ‘Fore Yard’. It turns a right angle and enters the large field known as ‘Old Yards’. Here is the main deserted village, with a complicated pattern of street hollows and platforms. Further features were visible in the next field of ‘Flax Close’. These are less clearly marked, consisting mainly of mounds, with a wide green road to the N. Between Flax Close and the River Itchen is a fishpond (PRN 5236).
2 The turf was stripped from Flax Close and the field rotivated to about 1.2m, with the intention of ploughing and sowing spring barley. A quantity of pottery, mostly late Medieval, was collected. At one point (A) there was a large mound and green glazed ware and tile were found here. Foundation stones are just below the surface. At B there were a lot of small pieces of lias and a black rim and soft sherds were found.
3 Finds include fourteen pieces of pottery, a piece of roof tile and a piece of building stone.
4 The earthworks cover 12.5 ha and are centred on a major hollow way which can be traced across the whole site. Several smaller hollow ways join the main one. On the N these fade out because of post-desertion ploughing and the S of the site has suffered from the creation of a field drainage system. A possible mill site exists in Old Yards (PRN 5235). Local white lias and imported red sandstone were probably used in the buildings on the site and Medieval roofing tile was also found, possibly indicating a manorial building. Pottery in Flax Close indicates occupation from the 12th to the 15th century.
5 Plan.
6 Descriptive text.
7 The site was visited on 19th June 1992 following an enquiry by the NRA concerning the dumping of dredgings from the River Itchen. The earthworks are still in good condition, being largely under pasture. An agreement was reached with the NRA to take the dredgings off site.
8 Field survey form from 1971.
9 Plan.
10 Further revised plan, as an update to 9, associated with the excavations at Flax Close.
11 These earthworks show exceptionally well on HER lidar layer. Monument slightly adjusted accordingly. Holloways, house platforms, house plots. Later ridge and furrow over most of the rear areas of house plots on north side of main east-west holloway
12 Portable Antiquities Scheme find provenance information:
Methods of discovery: Chance find during metal detecting1 Portable Antiquities Scheme find provenance information:
Date found: 2013-09-30T23:00:00Z
Methods of discovery: Metal detector