You are here: Home>Locations>Ettington>Church of St Thomas a Becket, Ettington 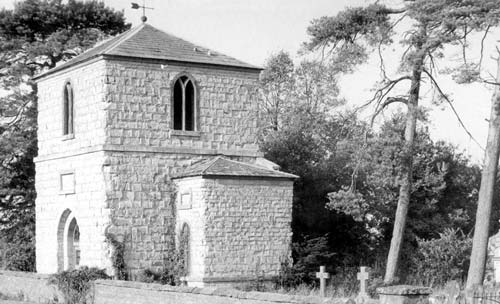 The tower of the Church of St. Thomas a Becket, Ettington
Warwickshire County Council
Description of this historic site

The Church of St Thomas a Becket which was built during the Imperial period. Everything but the tower was demolished in 1913. The tower has now been converted into a dwelling. The church was located on the north west edge of Ettington, on Banbury Road.

1 Built in 1798 and demolished, except for the tower, in 1913. A stone in the graveyard marks the site of the Shirley transept, 1800-1913. Had the reputation of being the ugliest church in the county.
2 1795-8 by Thomas Johnson. Only the tower and the nave W wall survive. The details were of the elementary Gothic of c1800.
3 The tower is still standing and is being converted into a private residence, using stone from the foundations of the church.
4 Press cutting about conversion.
5 Letters about the press cutting in 4.
6 Watching brief undertaken at the site of the church. Some human remains were located, although the foundations had been designed to avoid graves. The footprint of the former church had been uncovered, along with a 19th century mausoleum (the Shirley Crypt), built into the church on its south-east side.