You are here: Home>Locations>Merevale>Church of St Mary, Merevale 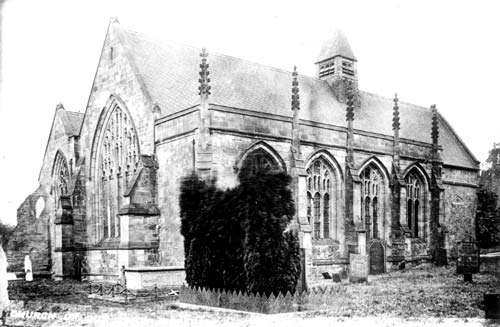 The Church of Our Lady, Merevale
Warwickshire County Council
Description of this historic site

The Parish Church of St Mary which is Medieval in origin and formally the gate chapel of Merevale Abbey. It is situated 200m south west of Abbey Farm.

1 Large chancel with aisles and short nave minus aisles, modern porches occupying the site of the S aisle. The existing building was the gatehouse chapel of the Abbey and is perhaps the best existing example of this kind of chapel. The chancel is part C14 and partly rebuilt c1500, with arcades of that date. The nave is C13 with arcades of that date, later filled in to provide the walls of the existing nave. There is a modern bell turret. A rood screen with enriched gallery, now at the W end, is probably C15 and may have come from the Abbey church. Monuments and good Medieval glass, including a C14 Tree of Jesse (restored).
2 Details in the Chapel of the Gatehouse were evidently removed from the Abbey church, including a curious wooden loft. Some ancient painted glass and a number of monuments.
3 Description.
4 Nave with aisles, & prob chancel, mid 13th century – ? temporary church for monks would account for small nave. S chancel aisle 14th century. c1850 – vestries added on site of S aisle. Nave aisles demolished ?18th century. Heating ducts – ?N aisle. Internal graves – 15th century brass slab at E end of chancel – vault on S side of chancel. 13th century effigy in nave, grave slab in nave. Re-set medieval floor tiles – inlaid 14th century type – in chancel and chancel aisles – ?from Abbey. External drains – whole exterior. Earthworks in fields to E and SE – ?monastic. Poss. fishpond/millpond to SE? Probably much grave disturbance of below-floor deposits. Possibly good survival of early floor deposits on sites of nave aisles. Good survival of earthworks adjacent to churchyard.
5 Archaeological observation during the construction of a new toilet at the Church of our Lady, Merevale, revealed stone footings below the south west corner of the vestry which may belong to the original 13th century aisle.

email
More from Merevale
More from Chapels and Churches