You are here: Home>Locations>Kenilworth>Church of St Nicholas, Kenilworth 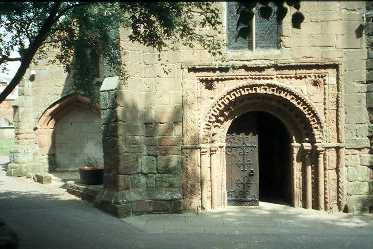 The church of St Nicholas was built during the Medieval period and was altered during the Imperial period. It is situated near to the site of the Abbey, Kenilworth.

1 Chancel, nave, N and S aisles, S chapel, S transept, N porch, vestry, and W tower. Mid 14th century; S arcade added about the end of the 14th century; the S chapel, vestry and S transept are modern. Of red sandstone ashlar. Ground floor of tower forms a W porch and the doorway, which is a later insertion, is an elaborate one of the late 12th century and probably came from the adjacent St Mary’s Abbey (PRN 3201). It is probable that for a century or more after the establishment of the priory (1122) the inhabitants of the neighbourhood used the nave of the monastic church, and that a separate parish church was not built until the middle of the 13th century.
2 Plan of the church.
3 Photograph of the exterior.
4 Mostly Perpendicular, but with the most sumptuous Norman doorway in the county. It is reset and may well have been the principal laymen’s entrance to the priory church. The tower higher up is Decorated, turns octagonal, and has a short spire. Nave S wall all of the drastic restoration of 1864. Font of 1664. Many architectural fragments, some very fine, from the adjoining priory. Tiles also.
5 Listed Building Description.
6 OS card.
7 Recent observations on west doorway.
8 During excavation of cable trenches for floodlighting, a sandstone wall was revealed. This may have formed part of the monastic precinct boundary, constructed around the time that the church was built.