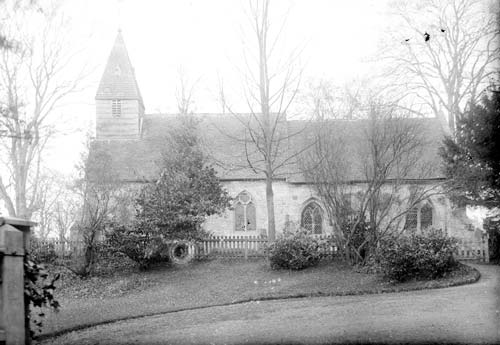 The Parish Church of St Mary which was originally built during the Medieval period. It was restored during the Imperial period. The church is situated north of Glebe Farm, Kinwarton.

2 Chancel and nave with no structural division between them; modern S porch. About 17.4m long by 4.4m wide. Consecrated in 1316, when it had probably been largely rebuilt, but some of the walling, especially at the E angles, appears to be of much earlier origin. In modern times the upper part of the E wall has been rebuilt, new windows inserted, and the W end lengthened about 1.5m, or rebuilt. Nave roof is probably C14; chancel roof is modern. A church is recorded here in the C12 and C13.
3 Plan of the church.
4 Photograph of 14th century glass in the chancel.
5 The church is small, of nave and chancel, with a weatherboarded bell-turret which stands inside on excellent sturdy posts with bracing; this is called C16 to C17. In the nave two Early English lancets, in the chancel Decorated windows, one with the sedilia cutting into it. In the chancel S window early C14 stained glass.
6 Restored 1850.
8 A watching brief was carried out in 1996 during the installation of a safe. A trench excavated beneath the altar came upon a large inscribed and decorated slate slab 22cm below the existing floor surface. The significance of this was uncertain, and it was left in situ.
9 In May 1996, observation of building work in the NW corner of the nave recorded a brick lined vault below the tiled floor of the nave.
10

email
More from Kinwarton
More from Chapels and Churches