You are here: Home>Locations>Wappenbury>Church of St John the Baptist, Wappenbury 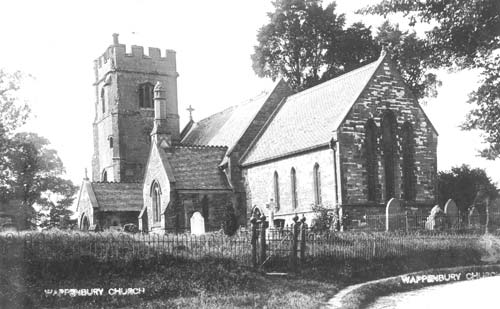 The Church of St John the Baptist, originally Medieval, was rebuilt in the Imperial period. It is situated 375m south west of the Wappenbury Hall.

1 Chancel, W tower, nave, S aisle, S porch and S transept.
2 Built in the early 13th century when it consisted of chancel and nave. Early 14th century W tower built on the S side of the nave, together with a S aisle and porch. Nave and S aisle completely ‘restored’ c1825 but were pulled down in 1885 and rebuilt in the character of 14th century work, and at the same time a S porch and transept were added and the whole church re-roofed. The first recorded presentation is in 1283.
3 Drawing of c1820.
4 Good Early English chancel with lancets, priest’s doorway and piscina. S arcade rebuilt in 1886, when the church was ruthlessly restored.
5 Noted by Ordnance Survey.
6 Observation of drainage works revealed 13th century foundation material, probably the foundation of a butress at the corner of the original 13th-century nave.