You are here: Home>Locations>Atherstone>Church of St Mary, Atherstone, North Warwickshire 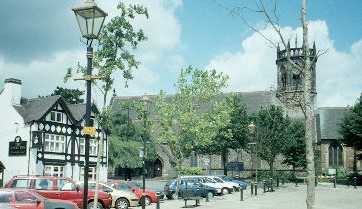 1 Chancel, central tower, transepts, nave and aisles. The chancel is 14th century or 15th century but is probably on the foundations of the 12th century chapel of the alien Abbey of Bec. The priory was refounded in 1378 for the Austin Friars, and the existing chancel was that of the monastic church. The octagonal embattled tower is early 15th century, the upper portion rebuilt 1782. Nave, aisles and part of the transepts are of 1849.
2 Descriptive text.
3 After the Dissolution the nave of the Friary church was converted into a chapel for the town, while the chancel housed the Grammar School. The nave and aisles of the church were rebuilt in 1849 and in 1888 the chancel was restored to the church, having been derelict since the Grammar School discontinued using it in 1863.
4 Photograph taken in 1977.
5 SMR card with photo missing November 2005.
6 Morton suggests that it is likely that the cloister range was attached to the north side of the church. Additional buildings and and areas such as a dovecote, barn and orchard are known to have existed at the dissolution of the friary in 1535.